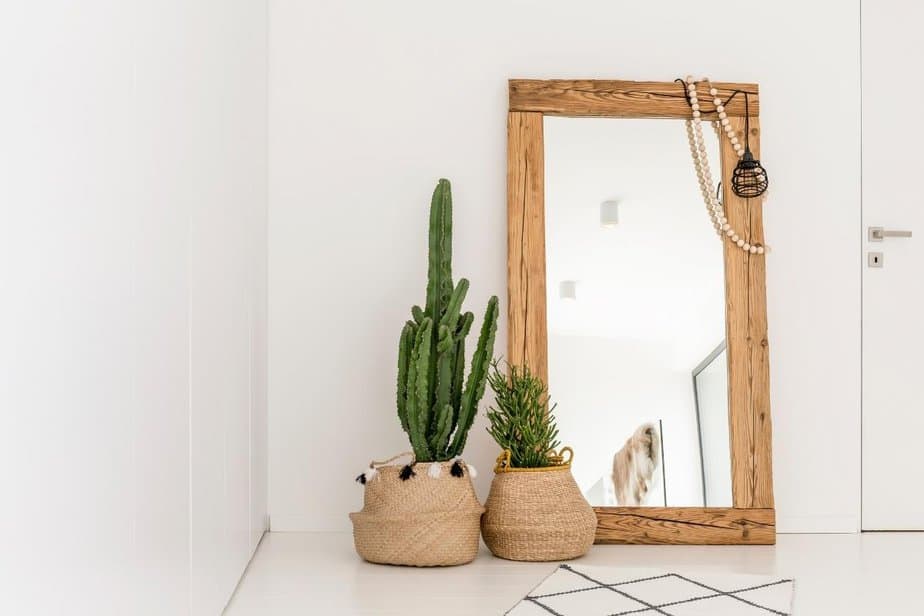 If you’re considering expanding your indoor cactus collection but don’t have the time for the more demanding varieties you’ll be happy to know that every cactus on this list is both low-maintenance and able to thrive indoors. This list of the easiest cactus plants to grow indoors has a wide variety of easy-to-grow cacti to choose from.

In this guide to the easiest cacti varieties to grow indoors, I’ll provide some basic information on each cactus as well as photos. By the time you’re done reading, you’ll easily be able to decide which cacti you’d like to add to your indoor garden!

The turk’s cap cactus is a Melocatus cactus genus with up to 40 species. The cacti grow natively in the Caribbean as well as in western Mexico all the way to northern South America and Central America.

The plant does best in well-draining and sandy soil that’s moderately acidic. Give the turk’s cap full sun for six hours a day and you may just see its red or pink flowers!

Named after the white fuzz that covers this cactus from its figurative head to its toes, the Cephalocereus senilis or old man cactus grows natively in parts of central Mexico. Although once threatened, propagation has changed the plant’s status.

Keep this cactus happy by allowing several inches of topsoil to dry out between waterings. Fertilize the old man cactus in the spring and you could see another unique feature of this indoor plant: pink flowers!

Rebutia is a cacti genus that’s globular and small, so perfect for indoor gardeners to grow! These cacti often produce flowers, and the flowers are usually much larger than the cactus itself, making the cactus hard to see at times depending on how many flowers are blooming at a given time.

The plants in this genus generally appreciate bright light, fast-draining cactus mix, and watering only when the soil has almost entirely dried out.

The Schlumbergera gaertneri or Easter cactus is a two-foot cactus that–like many of the varieties I’ve already discussed–grows stunning flowers in hues like white, purple, orange, pink, or red.

You can’t lump the Easter cactus care in with that of the average cactus. The Easter cactus likes partial sun, moderately cooler environments, and well-draining, loamy, acidic soil.

Looking like it would fit right in with the Rebutia genus, the small scarlet ball cactus is actually part of the Parodia genus. With 50 species all hailing from South America, this cactus is known for producing at least one colorful bloom atop its circular shape.

To keep this globular cactus happy, provide full sun to semi-shade. Water infrequently and cut back on watering entirely in the winter.

Here’s a fun fact about the barrel cactus: it belongs not to only one genus but two. Those are the Ferocactus and Echinocactus genera. This large, round plant grows natively in the Mojave Desert but can be found elsewhere.

During the hottest stretches of the year, you can get away with watering the barrel cactus about once a week. The plant enters a state of dormancy in the winter and doesn’t need any water then. Provide bright, indirect sunlight until the plant matures, then upgrade to full sun.

The Christmas cactus prefers high-humidity environments with some shade and temperatures that don’t exceed 80 degrees Fahrenheit. By providing this care, you have a better chance of seeing the Christmas cactus’ tubular, colorful flowers!

I started the list with the turk’s cap, and now I want to talk about the bishop’s cap or Astrophytum myriostigma cactus. This Mexican cactus species is unique in many ways. It has no spines, and it’s also in the shape of a star. The chalk-like scales on this plant produce a silver color.

Use fast-draining mix that’s plenty gritty for the bishop’s cap. Water throughout the spring and summer and then stop in the fall through the winter.

A long, tubular cactus that can produce flowers, the rattail cactus or Aporocactus flagelliformis is interesting to add to your indoor garden for its looks alone. That it’s easy to grow as well is just a nice bonus.

Provide full sun for this cactus, and use acidic, well-draining soil. Maintain moist conditions, especially in the hotter months, and then water the rattail cactus less in the fall.

Referred to as the pincushion cactus, the Mammillaria genus includes about 200 species of cacti. Many grow flower crowns around the base like the cactus is ready to spend the weekend at Coachella.

Keep conditions dry and provide bright sunlight for up to four hours every day. Use gritty, well-draining soil, and don’t water this plant in the winter, as that’s when it’s dormant.

The beautiful South American cactus species known as the Gymnocalycium mihanovichii or moon cactus boasts a tall stature and single spiked flower on top. It’s quite a sight to behold.

Use well-draining soil and limit watering. The moon cactus prefers some shade as well as a bright, warm space to grow.

The perfect nickname for the Opuntia microdasys is the bunny ears cactus, as its flat stems do indeed resemble bunny ears. This Mexican cacti species grows spiky flowers in the summer that are about two inches apiece.

When planted indoors, the bunny ears cactus prefers sandy and well-draining soil, temperatures between 70 and 100 degrees, and full sunlight. The drier, the better for this cactus!

Now here’s a cactus that’s sure to grab your attention, the fishbone cactus or Disocactus anguliger. This ornamental Mexican cactus species grows zigzagging frond-like leaves and can produce flowers in the autumn. The smell of the flowers is much beloved.

Allow at least three inches of the fishbone cactus’ soil to dry out before replenishing with water. Provide acidic, loamy, and well-draining soil that’s kept on the moister side. The fishbone cactus needs only partial sunlight.

The appropriately-named hedgehog cactus is part of the Echinocereus genus, which consists of round-shaped, mid-sized cactus species, about 70 in all. Some produce edible fruit, others beautiful flowers, the latter of which you’ll see more in the hedgehog cactus.

Give the hedgehog cactus full sunlight for six to eight hours a day. In the winter, keep conditions cool yet bright. Never let temperatures drop below 50 degrees, which is quite a generous temperature allowance for a cactus.

Although the saguaro cactus can grow to towering heights outdoors, indoors, its size is much more manageable. You can expect yours to grow 3.3 feet tall, but it can take between 20 and 50 years for it to happen. You’ll have to be very patient!

In the meantime, keep yourself busy by providing well-draining, gritty soil for the saguaro cactus and watering it sparingly. Let the soil fully dry out before you water it again.

Grow yours indoors in full sunlight and well-draining soil. Cactus potting soil is the most suitable for the fairy castle cactus. Water only when the soil is mostly dry, as soggy soil can lure in mealybugs.

At first glance, you can almost mistake the feather cactus for the old man cactus. Both are covered in white stuff, after all, but the Mammillaria plumosa looks more like it has downy feathers all over.

To keep this unique cactus variety healthy, water it throughout the warm season but never to excess. That will make the cactus rot. Provide well-draining soil and you could see its yellow or white flowers!

A head-turner of an indoor cactus, the Astrophytum Asterias or star cactus grows in Mexico and Texas natively. This large, spineless cactus has star-like points. Think of it as a bigger version of the bishop’s cap complete with a large flower in the center that’s often yellow.

Grow the star cactus in sandy, well-draining soil and in direct sunlight for at least six hours a day. Allow the cactus to dry out and water it only sometimes. Keep in mind that the star cactus grows slowly and blooms even more slowly.

The driest, sunniest conditions suit the prickly pear cactus the best. Choose a westerly or southerly-facing window where the plant can get up to six hours of direct sunlight per day. Drought-tolerant, you can go longer than you think without watering this cactus.