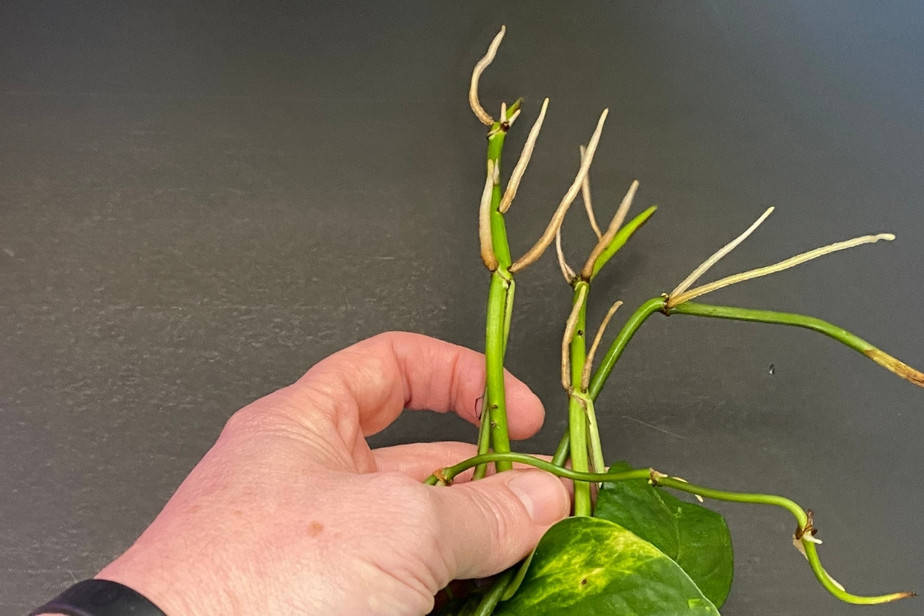 Rot root is one of the most dangerous diseases an indoor plant can have, but if your pothos, also known as “Devil’s Ivy” is suffering from root rot, it’s important to know that it can likely be saved. I’ll tell you how to save your pothos from root rot, step by step in this article.

How to save a pothos from root rot? If your pothos has root rot, remove the plant from its pot and cut off the dead or dying roots. Prune any dead leaves and stems. Apply hydrogen peroxide to the roots. Replace your plant in fresh potting soil and reduce watering.

This guide to root rot in pothos will tell you everything you need to know to potentially save your plant. I must be clear that root rot is sometimes not reversible, but you should always give your pothos its best shot at recovery!

What Is Root Rot and What Does Pothos Root Rot Look Like?

Before I can tell you how to save a pothos from root rot, I want you to be clear on what root rot is, what causes root rot, and what the symptoms are in pothos particularly so you’ll know how to tell if your pothos has root rot.

Plants grown indoors or outdoors, at their most basic, require only two things, oxygen and water.

You provide the water, and technically the oxygen too. When your pothos has enough of both, it’s happy.

It’s when your pothos has more water than oxygen that everything is thrown out of balance.

Water permeates through the pothos pot, soaking through to the bottom but not exiting. The plant becomes saturated in standing water.

The excess standing water prevents oxygen from getting through to the roots, so they can’t breathe. It’s as if your pothos is drowning in the water.

What’s confusing is that when root rot starts, your pothos can look fine outwardly. Down at the root level though, the roots are starved of oxygen.

Like any cell that’s deprived of oxygen, the roots begin to die one by one. Before you know it, your pothos starts manifesting symptoms above the soil line that affect the stems and leaves too.

What Causes Root Rot in Pothos?

How does an indoor plant like the pothos develop root rot? It’s a fungal disease, but that fungus doesn’t come out of nowhere.

You should allow pothos soil to dry out before you water it again. At this rate, you should only water the plant about weekly, maybe as seldom as every two weeks.

When you water the pothos every other day because you don’t know any better, the roots have too much water and the symptoms of root rot begin to take hold.

Overwatering alone may not contribute to root rot. The type of soil you select for your pothos can cause or worsen this disease too.

If the soil isn’t specifically well-draining soil, then the water has nowhere to go. It just saturates and accumulates.

The Symptoms of Root Rot in Pothos

What does pothos root rot look like exactly? The symptoms aren’t that different from what you’d see in the other plants in your indoor garden.

Here are the signs of root rot.

You realize now that your pothos might have root rot. Time is of the essence, so be ready to follow these steps per the intro.

Overwatering your potted plant is more than likely what got you into this mess, so that’s the first thing you want to stop doing.

Root rot can indeed accelerate, as the more water you provide pothos, the less oxygen the plant’s roots receive.

You can’t know how much damage root rot has truly done until you see the root system of your pothos. That will entail taking the plant out of its pot.

Since pothos can grow rather large, you might want to have a second person help with removal. For smaller, younger pothos, you can probably take care of removal yourself.

If you do have another person involved, one of you should firmly grip the pot while the other holds onto the base of the pothos. Do not pull the plant by its leaves or vines, as they will rip off.

Keep that in mind if you’re removing the pothos from its pot by yourself, as the same logic still applies!

Lay down a towel or some paper towel on a flat surface such as your kitchen floor or counter. Place the pothos there after it’s freed from its pot.

Now it’s time to assess the state of the roots. Healthy plant roots should be white and firm.

If your pothos has roots that are brownish or black, that’s a bad sign. So too are any slippery and mushy roots. The terrible odor that you could smell when your pothos was in its pot will now permeate the room.

Those decaying roots cannot stay attached to the pothos if you hope for your plant to survive.

If a root is half black and half white, then only cut to the white area. For roots that are black from top to bottom, you can remove the entire root.

Each time you trim one root, you should disinfect your pruning shears or gardening scissors. I recommend bleach or 100-percent isopropyl alcohol.

Root rot is a fungal disease, and it can spread to healthy roots. By cleaning your pruning tools, you control the disease.

Less urgent but still important is cutting away any dead or decaying pothos foliage.

Again, as you did when cutting the roots, be sure to disinfect your pruning tools in between snips.

How do you kill the fungus that has caused root rot to spread across the pothos? I recommend hydrogen peroxide for pothos with root rot.

This does not have to be a strong concentration! Three-percent hydrogen peroxide more than suffices.

In a small, shallow container, pour the hydrogen peroxide. Then take your pothos and dip the roots into the mixture. Any remaining fungus should die off.

If you don’t want to run out and buy a new pot for your pothos, you don’t necessarily have to. However, you will have to disinfect its current pot.

I would suggest using hydrogen peroxide again. Make sure you sterilize the entire pot. This way, you can be confident that the fungus is gone and your pothos has the best shot at surviving.

Don’t try to use the soil your pothos was growing in before. It’s almost surely laden with fungus. If your pothos is reinfected again, it will certainly die.

Instead, fill the pot with fresh, clean potting soil. Then put your pothos back in the pot.

From there, continue caring for pothos as you would any other time.

Will My Pothos Survive Root Rot?

This is the question that every indoor gardener who’s dealt with root rot asks. Will their plant pull through and survive root rot?

The answer depends on a few factors such as.

The earlier you catch root rot, the better. That’s true for pothos as it is for any indoor plant. Fewer roots will have died, so the root system will be stabler.

After all, once your pothos has fewer live, healthy roots than it does dead ones, its chances of survival drastically go down. It’s probably a goner.

How you care for your pothos while it’s recovering from root rot also matters. If you didn’t realize that overwatering caused root rot and you go right back to watering the plant too much, it will die.

Even if this pothos happens to die (which would be sad but is indeed a possibility), at least you know better next time so you can keep a future pothos alive for longer!