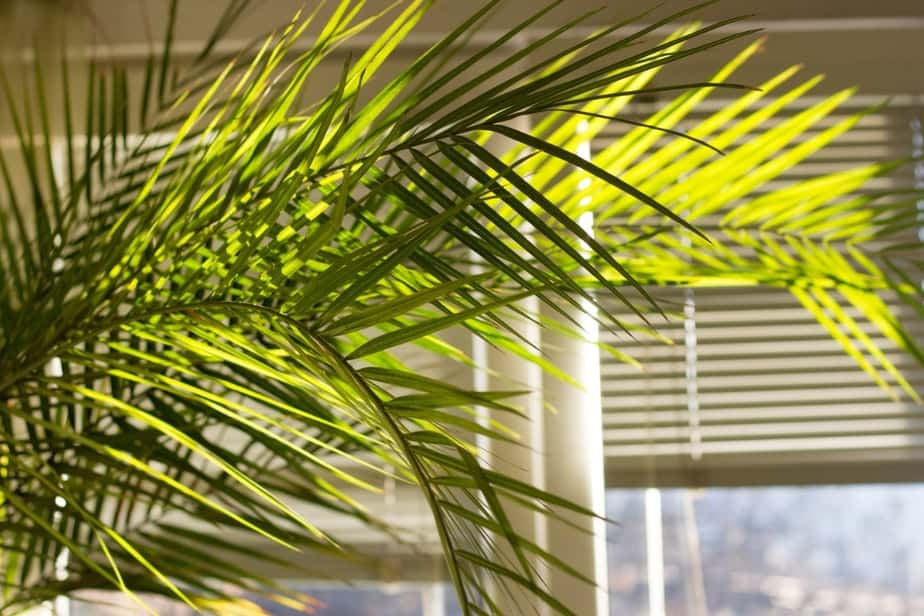 If you want a taste of summer in your home or office every day, the majesty palm is a great pick. In this article, I’ll share with you everything you need to know about growing and caring for your own majesty palm.

Here’s how to care for a majesty palm:

Keep reading for more actionable tips in the above care areas as well as a discussion of common issues to look for and prevent with the majesty palm!

The majesty palm or Ravenea rivularis comes from Madagascar. It’s considered a rarer plant, with only 900 estimated to have existed as of 2010.

Part of that has to do with the plant’s proximity to desert regions in Madagascar, in which it can’t grow too close.

In its native environment, it’s not unheard of for majesty palms to reach heights of 98 feet. Indoors, the likely height for the majesty palm is three to five feet tall. That’s much more manageable!

Besides its long, rather spindly fronds, some varieties of the majesty palm can also grow flowers. The flowers will develop on two to three-inch branches before occasionally transforming into fruit.

The fruit is small, bright red in color and is edible.

Even better is that the majesty palm itself isn’t toxic to people or pets, but I still wouldn’t recommend eating more than its fruit, if even that.

Caring for a Majesty Palm

Are you ready to start growing a beautiful, towering majesty palm? Per the intro, here’s a breakdown of everything you need to know.

Without the use of soil hygrometer sensor to read the exact amount of water in the soil, using your finger remains your most accurate gauge for when to water the majesty palm.

The plant’s soil should be dry several inches deep, even midway down before watering.

Watering when the majesty palm’s soil is a few inches deep doesn’t mean starving the plant of water. If you notice brown fronds that feel crisp and snappable, you’ve gone too long without watering.

Seasonally, you’ll likely amend this watering habit. In the summer, don’t be surprised if you water the majesty palm twice as much as the winter time due to the amount of light or heat your majesty palm is experiencing.

Then, in the autumn and especially in the winter, you’ll scale back. The majesty palm is considered dormant in cool weather

A few bouts of underwatering shouldn’t kill your majesty palm, but overwatering it can. An overwatered houseplant is more likely to develop root rot.

The first sign that you’re overwatering your majesty palm is yellowing fronds.

Scale back your watering if you see this telltale symptom!

The majesty palm is happiest in bright, indirect sunlight.

To create indirect light, install a curtain or window covering for an easterly or southerly-facing window the majesty palm sits by.

I talked earlier about how the majesty palm has delicate fronds. That’s why direct sun is the worst type of lighting for this plant.

In nature, majesty palms are understory plants. This means they’re not the top layer of vegetation.

That layer would receive direct sun whereas an understory layer would get only dappled sunlight.

If you have a houseplant that’s even larger than the majesty palm, then you can recreate its dappled sunlight environment at home (or the office) by growing the two plants close to each other.

For most homeowners and office workers though, it’s a lot easier to create bright, indirect light with a curtain.

If the only conditions you can provide for your majesty palm are low light, such as a windowless cubicle, the palm can adapt. However, if you see leaning or stretching from your majesty palm, then you should move it to a brighter area right away. It’s starving for light.

Best Soil for a Majesty Palm

Majesty palms detest being left in standing water, making well-draining soil a must for this particular plant!

Succulent or cactus potting mix can recreate the arid, even sandy conditions the majesty palm grows up in its native Madagascar.

If you do buy a succulent mix for your palm, it doesn’t hurt to add some extra peat moss.

This soil amendment, referred to as sphagnum moss, can hold onto plant nutrients and keep the soil airy.

If you don’t mind getting your hands a little dirty, making your own potting mix for the majesty palm is another option.

I recommend pumice or perlite (one part) with gardening soil (two parts), and sand (two parts).

Perlite will increase the drainage capacity of the potting mix, which the majesty palm needs. Pumice is an aerator, but it can hold onto moisture, so use it in small quantities.

Best Type of Pot for a Majesty Palm

To prevent standing water, a porous pot material is best for the majesty palm.

That being said, your options are terracotta or clay. These materials, when raw, can absorb a lot of water.

When combined with well-draining soil and the sizable drainage holes in the pot, root rot stands no chance of harming your majesty palm.

In some instances, you might find that your palm’s pot is sucking up too much water. If that’s a concern, try a glazed clay or terracotta pot.

Choosing a pot or planter with a glazed finish reduces the porosity of the pot materials to a degree.

You still won’t have to worry about standing water, but you won’t need to water your majesty palm every other day either.

Alternatively, a plastic liner in the bottom of an untreated terracotta or clay pot works just as well. Plastic is nonporous, so it retains some moisture, but not to excess.

Given the majesty palm’s balmy home, it should come as no surprise that this plant likes high temperatures. Its comfortable temperature range is between 65- and 80-degrees Fahrenheit.

Higher temps up to 85 degrees don’t bother the majesty palm in the slightest. However, once conditions get too much warmer, such as into the 90s, it might be too hot for this houseplant.

The lowest temperature the majesty palm has been known to survive is 20 degrees. For a palm, this is impressive. Many plants that are non-cold-tolerant can only withstand temps into the 50s or 60s.

If yours is exclusively an indoor palm tree, then being exposed to such cold conditions can cause shock. The worst damage from cold can lead to ice crystals developing within the tree’s cell walls, which can rupture as the temps begin to rise again.

What about the humidity preferences for the majesty palm? Unsurprisingly, the majesty palm likes it humid. The average relative humidity in a household or office, which is between 30 and 50 percent, will suffice.

That said, if you can crank up the humidity even more, the majesty palm will feel right at home!

Best Fertilizer for a Majesty Palm

Like many houseplants, the majesty palm requires fertilizer about once per month during its active growing season in the spring through the summer.

Avoid fertilizing during this plant’s dormancy in the winter.

The best fertilizer for the majesty palm is liquid fertilizer. Choose a weak formula or dilute it before applying.

If yours is slow-release liquid fertilizer, then fertilize the majesty palm more seldom than monthly. You can wait about three months between fertilizing.

On that schedule, you might end up fertilizing the houseplant only once during its active growing season.

When shopping for fertilizer, choose a formula with a higher ratio of nitrogen than the other two macronutrients.

Is your majesty palm not growing exactly as you had expected? Here are some common issues to be aware of as you start this growing journey.

All houseplants attract their fair share of pests, the majesty palm among them. The species that most enjoy this spindly palm tree are mealybugs, sugarcane borers, and palm leaf skeletonizers.

Let’s talk more about majesty palm pests and how to treat them.

Mealybugs love warm, moist environments, and it just so happens that the majesty palm does too.

When this small insect invades your indoor garden, it will suck up plant juices. Worse than that is how mealybugs are disease vectors, so they could take down your entire indoor garden.

The white color of mealybugs can help you detect them on houseplants like the majesty palm, as can the white residue they often leave behind.

To treat mealybugs non-chemically, use neem oil, insecticidal soap, or rubbing alcohol. You can also invite ladybugs into your garden, as ladybugs will happily feed on mealybugs.

The sugarcane borer is a type of moth that tends to appear in hot regions such as Louisiana, northern Argentina, South America, Central America, and the Caribbean. Sugarcane borers can fly, which makes controlling them more difficult (but not impossible!).

Insecticide usually works on these creatures.

You can wash these bugs away with a gardening hose or apply more serious treatments like insecticides.

Majesty palms and their other palm brethren are susceptible to a range of diseases. This is what you need to know.

Bud rot is more common in outdoor palms that are regularly exposed to tropical storms or blasted with rain. Overwatering could also put your indoor majesty palm at risk.

Bacterial pathogens cause this disease, as can fungus species like Thielaviopsis and Phytophthora.

The new buds of the palm tree will feature wilted leaves and black lesions. The texture of the bud can become slimy and slick. The disease eventually progresses to even the older palm fronds, which will die as well. That leaves just the trunk.

Prevention is the best treatment, as the chances of your majesty palm recovering from a case of bud rot are low.

Also known as Ganoderma root, butt rot is attributed to the Ganoderma zonatum fungus. The initial symptoms are old frond drooping, followed by sagging of the palms that are parallel to the tree’s trunk.

When new fronds appear, they’re yellow instead of green and they don’t grow as large as they should. Eventually, the palm’s head falls off entirely, then the trunk can collapse.

When parts of your palm tree die, don’t leave them attached. Try to avoid injuring your majesty palm as well. Once a palm has butt rot, it’s practically a goner.

Graphiola leaf spot or false smut occurs due to the Graphiola fungi. This disease is limited to plants in the Arecaceae family such as the majesty palm.

You might notice what looks like warts all over your plant’s fronds. The black spots later grow filaments. These growths will occur on old leaves instead of young ones.

Control watering and watch your humidity, as there is such a thing as high humidity for even palm trees.

Should your majesty palm have false smut, separate it from your indoor garden and prune the affected fronds. If more fronds are affected than not, you have to let the tree go. Removing too many fronds weakens it.

The neon inflorescences are just one part of what makes the bromeliad such a sought-after indoor plant. In this guide I'll explain how to encourage your plant to bloom as well as how to care for your...

Even though the Venus flytrap is among the most popular carnivorous plant species, the Dionaea muscipula or Venus flytrap's unique carnivorous diet can sometimes turn indoor gardeners away. Unless...