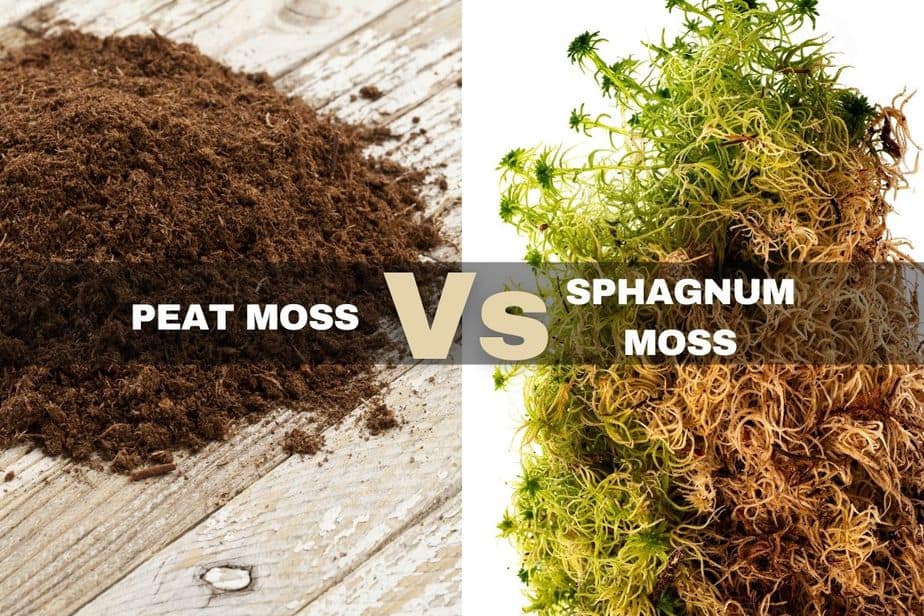 Although peat moss and sphagnum moss often get lumped in with one another, the two mosses are indeed different. They admittedly share some similar traits as well. I’ll talk about both in this article.

How are peat moss and sphagnum moss different? The same? Peat moss is technically sphagnum that’s saturated and decaying. Sphagnum moss usually grows above the water’s surface on the ground. Both types of moss make an excellent addition to the soil of many indoor plants.

There are more differences and similarities still between peat moss and sphagnum that I plan to discuss in this article. By the time you’re done reading, you’ll know the differences between sphagnum moss and peat moss!

The Differences Between Peat Moss and Sphagnum Moss

If you use the terms peat moss and sphagnum moss interchangeably, you technically are not wrong. They’re two parts of the same plant, but due to where they grow, the following differences make themselves apparent.

To reiterate what I mentioned in the intro, sphagnum moss grows on the surface of the swamp or the ground, such as on soil. Peat moss is well under the waterline. There, it grows in the murky depths.

What happens when plant matter spends too long saturated in water? It begins decaying, of course. That’s what happens to peat moss.

You may add peat moss to your indoor plant’s soil when the moss is still alive but in the midst of its decomposition. Sometimes, you can even use the moss after it’s dead.

Compared to surface-growing sphagnum moss though, peat moss is already well into its decomposition stage.

That’s why the composition of the mosses is very different.

Every body of water has Dissolved Organic Matter or DOM. You’ll find DOM in freshwater and marine waters alike.

Dissolved Organic Matter forms when algae, bacteria, and plant matter within the water break down and decompose.

Although DOM and decaying matter might not sound like they’d benefit your indoor plants, that couldn’t be further from the truth.

Sphagnum, due to where it grows (above the water’s surface, as a reminder), does not contain DOM. It may have soil organic matter or SOM, though.

Compared to how much DOM that peat moss may contain though, sphagnum might have less SOM.

According to SF Gate, in a 2020 article, they cited a stat from the University of Missouri Extension that mentioned how organic matter is only about four to six percent SOM for the average garden.

Thus, you could be missing out on some of the above-mentioned soil benefits since sphagnum has fewer organic materials than peat moss.

By adding compost to the soil, you can make up for this lack.

Peat Moss Is a Lot Older

When extracting sphagnum in a bog or swamp, the recommendation is to allow at least five to six years for the moss to grow in large enough quantities to be harvestable.

Thus, we can assume that most sphagnum that ends up in the pots of your indoor plants is at least five years old but likely much older.

Even if the sphagnum was twice or thrice that average age range, it still wouldn’t come close to being as old as peat moss.

If you’re wondering how long it takes peat moss to recede into the water and grow, the answer is a very long time, thousands of years in fact. Peat moss is often the foundation of many swamps around which it grows for that very reason.

By the time peat moss or sphagnum moss reaches you, the consumer, to go into your plant’s soil, it can be tough to visually tell the two apart.

When the mosses are growing freely in their native environments though, you can get a much better gauge for which is which.

Peat moss usually has that texture that you imagine when you think of moss. It’s thin and bright green, sort of like turf. If you touched it or walked on it, you can expect it to be wet and squishy.

Sphagnum moss could be wet and squishy too, but it doesn’t resemble turf. Instead, it grows noticeable fibers.

This one shouldn’t be a surprise considering what you know now about peat moss.

Since it can spend up to thousands of years submerged under the water, peat moss absorbs a lot of that water over time.

Peat moss can contain upwards of 70 percent water. The other 30 percent would be organic and decaying matter.

When choosing soil amendments your indoor plants, you must carefully review where on the pH scale each amendment falls.

If the plant’s soil is more on the neutral side, then you should only use amendments that aren’t too acidic or basic.

For acidic soil, slightly acidic soil amendments are appropriate; you can follow the same rule of thumb for basic or alkaline indoor plants.

You might know of tannins only in coffee, but they’re a natural compound that’s astringent and bitter. They’re found in all sorts of plant matter, and that includes peat moss.

Due to the inclusion of tannins in peat moss, it’s more acidic on the pH scale, with an average range of 3.0 to 4.5.

The Traits That Peat Moss and Sphagnum Moss Have in Common

Although peat moss and sphagnum have some very striking differences between them, they are alike in a multitude of ways, so let’s talk about the similarities now.

Yes, I had to get the obvious one out of the way, but both sphagnum and peat moss are indeed moss.

While both peat moss and sphagnum moss come from the same plant, the moss grows in different circumstances, the surface of the soil versus in the water, but it is still the same moss.

Peat moss and sphagnum moss are two sides of the same coin, so to speak. Depending on where the moss was growing determines how we refer to it once it’s packaged for sale to the public.

Despite that sphagnum is made of far less water by default, both types of moss are effective at water retention.

Both Can Help You Grow Your Indoor Garden

One of the best reasons to learn about how peat moss and sphagnum moss are different is so you can use both appropriately to tend to your indoor garden.

As I mentioned earlier, peat moss is a very common soil amendment.

What is a Soil Amendment

A soil amendment, is an organic or inorganic material you add to the plant’s soil to improve its condition.

In the case of peat moss, peat moss can reduce the density of the soil.

If your soil has already compacted– or started to press down on itself and become hard and immoveable–then water and air cannot travel freely to the plant’s roots.

With peat moss in your plant’s pot, the soil will have some fluff to it for aeration.

The water retention abilities of peat moss make it a natural choice as an indoor plant soil amendment as well. Using peat moss can release water gradually so your plant’s soil maintains moisture but isn’t soaking.

Using, peat moss enables the soil to retain nutrients and boosts the cation exchange capacity of your indoor plant.

The cation exchange capacity determines how many negative charges the plant’s soil has when the soil adsorbs nutrient cations potassium, magnesium, and calcium.

To put it more simply, the cation exchange capacity rate tells you how well the soil can send nutrients to the plant for uptake. Thus, peat moss can come in extremely handy for your indoor plants, especially when adding fertilizer, plant food or other amendments to the plant’s soil.

Sphagnum moss on the other hand isn’t often used as a soil amendment.

I mostly use sphagnum moss when I’m growing seed starters or propagating plants, mainly from cuttings.

I’ve found that adding sphagnum moss to the top of the soil of indoor plants that require a more damp soil or need to retain moisture more than other plants has worked extremely well.

You just need to make sure you don’t over saturate the sphagnum moss too often or you’ll be creating a breeding ground for issues such as gnat infestations and root rot.

When used in moderation, I’ve found that mixing sphagnum moss with the soil of my indoor plants has been a true game changer in keeping their soil moist and fertile.