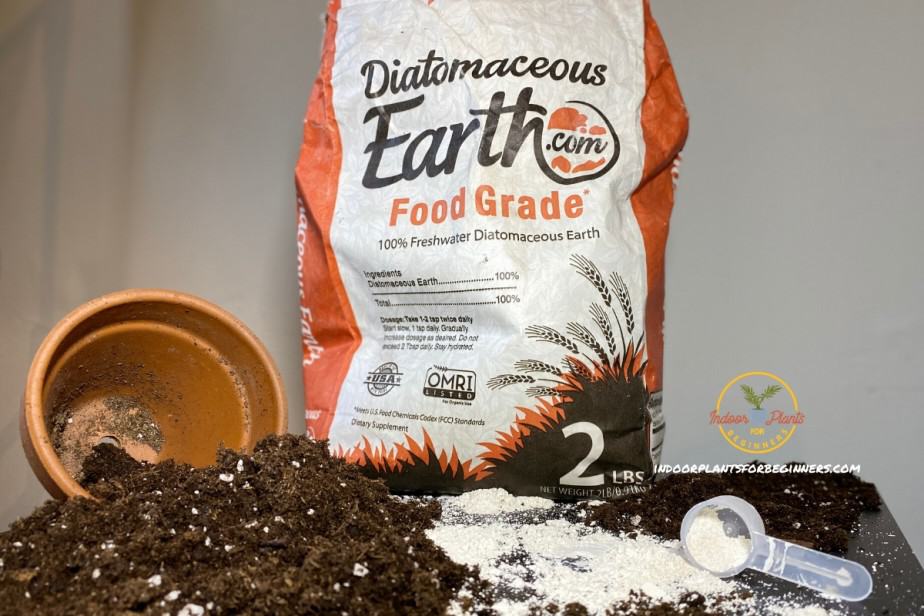 Diatomaceous earth needs to be in every indoor gardener’s arsenal of eco friendly tools, supplies & products. If you’ve never heard of diatomaceous earth before then you’re missing out on a natural and safe way to get rid of unwanted garden pests like, fungus gnats, pill bugs and anything else with an exoskeleton that is unwanted in your indoor plants. For the houseplant lovers who don’t know what diatomaceous earth is, what it’s used for or how to use diatomaceous earth with their plants, this post will answer those questions and many more.

Diatomaceous earth is organic sedimentary rock powder that’s used to kill & ward off a slew of indoor garden pests including mites, ants, aphids, maggots, flies, and slugs, without any chemicals & while boosting porosity in pots & deodorizing your indoor plants.

In this article, I’ll talk much more about diatomaceous earth’s many benefits. Before that, I’ll get into what this powder really is and where it comes from. I’ll even explain how to use diatomaceous earth, so keep reading! You’re not going to want to miss it.

What Is Diatomaceous Earth?

The rock in diatomaceous earth gets broken down into a powder with a distinct white hue. Like most particles, the powder has various micron sizes, with the smallest pieces about a millimeter (three microns) and the biggest ones up to 200 microns.

The porous qualities of diatomaceous earth make it highly sought-after for indoor and outdoor gardeners. It’s not very dense, similar to baking flower or baby powder, and the way you can easily sift it.

If you’ve ever handled pumice powder before, then you’ll have a pretty good idea of what diatomaceous earth feels like. It’s semi-abrasive and not as soft as it looks.

What is Diatomaceous Earth Made Of?

Iron oxide (0.5 to two percent), and alumina (two to four percent) also comprise diatomaceous earth. The latter is in there because this powder also contains clay minerals.

How Does Diatomaceous Earth Benefit Your Indoor Garden?

You may remember from reading some of our previous articles that some houseplants need potting soil while others are more suited for potting mix. The latter sometimes uses a medium or several media with a different texture than the soil (if the houseplant requires soil at all).

If you have Bonsai plants or other indoor plants you’re growing in hydroponic containers, then you don’t want to skip the diatomaceous earth. It will serve your houseplants best when you combine it with potting soil. Not only does the root zone get more air, but the porosity of diatomaceous earth enhances drainage and helps loosen compacted potting soil as well.

Diatomaceous Earth Can Be Used For Deodorizing Your Houseplants

Have you ever noticed that sometimes your houseplants get a little stinky? It happens. Even normally fragrant plants can go sour, often because of excess watering.

The odor you’re smelling could be the development of mildew, mold, or funguses.

In other cases, you could add compost to your indoor plants, but man, does it reek. To combat the smell, try applying some diatomaceous earth. It’s a natural deodorizer that will erase unpleasant odors so you don’t have to move your houseplants outside.

Diatomaceous Earth Can Be Used For Pest Control

The first of these? Mites and ticks. You might keep your houseplants indoors now, but that might not have always been the case.

Tiny insects like mites and ticks could have jumped onboard one or more of your houseplants while they were left outside. If you have any pets in your home, developing conditions like Lyme disease and Colorado tick fever is higher when your bringing in plants from outside that could now contain mites or ticks.

Along with pets, people can get these conditions, too. By using an indoor-friendly form of pest control, such as diatomaceous earth to eliminate these potential hazards , you can greatly reduce the chances of having mites and ticks that have hitched a ride on your houseplants from the gardening store back to your home.

Besides mites and ticks, ants also dislike diatomaceous earth. That’s a good thing, because they can transport insects like aphids to your indoor plant, giving them a new place to live.

Speaking of aphids, they like to invade your young plants, drinking all the sap they can get. Your poor houseplant then never grows to full capacity.

If you have other houseplants, aphids will move on to them too, potentially creating viruses in their wake. While chemical-laden products like pesticides will kill aphids on the spot, diatomaceous earth can also get rid of them without damaging your houseplant.

Using Diatomaceous Earth as your pest control also means, you don’t have any dangerous fumes to breathe in while at your home or office either.

Diatomaceous Earth Will Get Rid of Fungus Gnats

While slugs can’t get into your home or office super easily, it’s not impossible, either. If you ever spot one, you don’t need salt. Diatomaceous earth will keep slugs from proceeding to your plant if you pour some in a ring around the threatened houseplant. The diatomaceous earth can actually cut the snail’s delicate skin, making it turn tail and leave.

When it comes to making natural fertilizer, manure is a great ingredient (yes, even though it’s gross). Many gardeners, myself included, will also use compost for their houseplants.

If you rely on either of these products even semi-regularly, there’s always the possibility that maggots can invade your houseplants. These gross bugs like unfinished compost and manure especially.

You might not even notice the maggot larvae wriggling in your manure or compost until it’s too late. You obviously can’t use this on your houseplants, so now it’s back to square one.

Like many other insects, diatomaceous earth powder can keep maggots away without you having to shop for strong, damaging chemicals.

No. Diatomaceous earth is a totally natural product that you can apply to the soil’s surface and on your plant’s leaves without worrying about damaging the plant. It can even get in the soil to increase porosity.

If you were applying your diatomaceous earth and more of the powder got onto your plant than you wanted, just scoop it off. If used as directed on the package container, you have nothing to worry about.

How Often Should You Apply Diatomaceous Earth to Indoor Plants?

Apply the diatomaceous earth to the topsoil and let it sit for about 7 days. If the pest problem is no longer a problem you can put your diatomaceous earth away until next season or the next bug or pest infestation. It’s not something you need to apply continuously.

Can garden worms be killed with diatomaceous earth?

No, diatomaceous earth has no effect on earthworms and their fellow warm-blooded brethren. That said, most worms are quite harmless in a garden; in fact, earthworms can act as a natural tiller of soil to maintain its quality. Keep in mind that not all bugs are pests.

Good gardening is about nature and good balance.