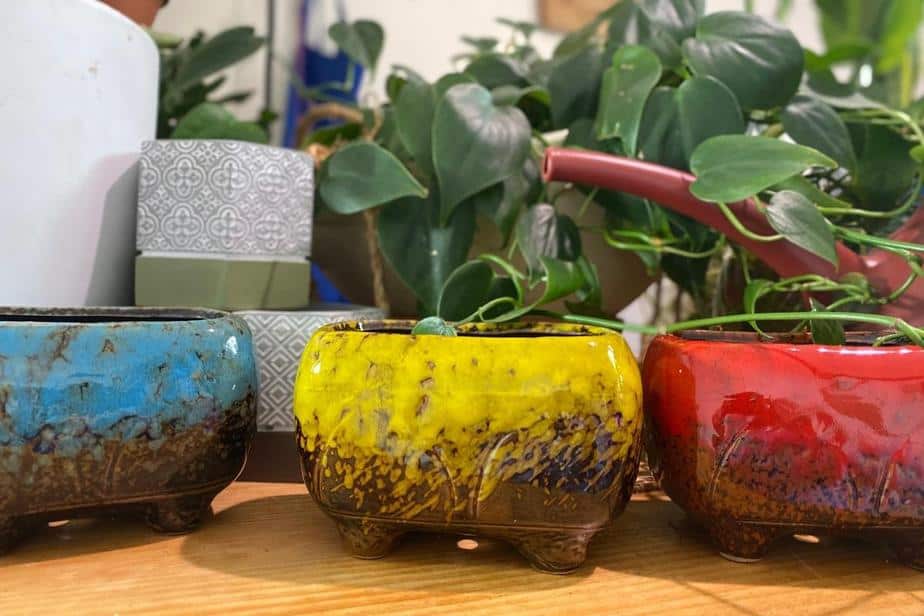 Here’s why your philodendron looks droopy and limp:

Ahead, I’ll talk in much more detail about the care mistakes you could be making with your philodendron, some possibly without even realizing it! This article will serve as your informational guide on how to get your philodendron on the road to recovery.

Here Are 8 Reasons Your Philodendron Leaves Are Limp and Droopy

All plants benefit from a regular feeding of fertilizer, especially as the active growing season gets underway. Fertilizer provides the nutrients that can be lost in a plant’s soil over time through watering.

Some indoor gardeners, especially new ones, can assume that because fertilizer is so beneficial that their houseplants must need it all the time. Yet at the end of the day, fertilizer is a chemical, and overexposure to any chemical will hurt your plant.

If your philodendron has been overfertilized, then outside of leaf drop, you’ll notice other signs. They include stunted or ceased growth, brown leaf tips and margins, wilting, and yellowing.

You might also see fertilizer crust on the soil, a surefire sign that you’re feeding your houseplant too much fertilizer.

Philodendron requires fertilizer roughly every month in the spring and summer. Then, as the growing season slows down, space out the application every six weeks. Since you’ve overdone it in the past, I would say be even more generous with your timetable and fertilize every eight weeks, roughly once every four months.

Since the philodendron is dormant at this stage, it’s not absorbing nutrients at nearly as fast a rate as it was during the warmer months. That’s why you can get away with fertilizing it so infrequently.

When you use fertilizer on indoor plants, you usually have to dilute it with water. Applying straight fertilizer, even in the right quantities, could cause the above symptoms as well, so be careful!

For more information on over fertilizing indoor plants, you’ll want to read my article: How to Fix Using Too Much Miracle-Gro on Your Plants

Some indoor plant species such as succulents can go weeks without water. The philodendron cannot.

It’s okay if you forget to water your philodendron plant for a couple of days, but the longer you deprive the philodendron of water, the sadder its leaves will become.

Before the leaves of your philodendron kiss the ground from sagging, they might be yellow with brown edges. The feel of the leaves will also be different.

You should know by now what a healthy plant feels like. Unfortunately, yours will be crispy, dry, and maybe even a little shriveled.

These symptoms aren’t exclusively present in underwatered plants, which can really make caring for an indoor plant confusing, philodendrons and otherwise. If you haven’t started to already, it’s a good idea to track when or how often you’re watering your philodendron. This will help you rule out causes of its droopiness.

It’s easy to think that because the philodendron has such large leaves, especially when compared to most other houseplants, that it must need more water than your average indoor plant.

Both underwatering and overwatering your plant can kill it, and the latter will induce a plant disease known as root rot. In a case of root rot, the plant’s roots are oversaturated in water. Unable to get oxygen, the roots begin to die one by one. Before you know it, your philodendron’s leaves are sagging, then they’re wilted and limp. Finally, they’re dead, as is the rest of the plant.

The leaves can look brown and/or yellow before they die, which sounds like the symptoms of underwatering. You can tell root rot apart from an underwatered houseplant in a few ways. For one, although the philodendron is drooping, its soil is wet. That won’t be true if you’re not watering your plant often enough.

Your philodendron might have edema as well, also spelled oedema. This physiological plant disorder occurs when the plant’s roots absorb water at a rate that’s too fast for the rest of the plant to use. Transpiration cannot take place in the leaves, so the pressure accumulates there until the leaves burst.

The exploded dead leaf cells will look like blisters. If you don’t see any blisters on the surface of your philodendron’s leaves, make sure you check underneath. That’s where oedema is much more common.

Depending on how advanced the root rot is, you might be able to save your philodendron. Yet if your plant’s leaves are already discolored and sagging, the disease has progressed pretty far. In the future, make sure you water your philodendron only when half of its soil is dry, so about three inches deep. You can ascertain how dry the soil is by putting your clean fingers in and feeling for moisture.

The large leaves of a philodendron are like an oasis in the middle of the desert to a variety of small insect species. These include the mealybug, spider mite, and aphid.

The teeny-tiny mealybug will feast on subtropical plants, houseplants, and greenhouse plants, drinking the sap in the plant’s roots. You can tell you have a mealybug problem if you see a wax layer that’s powdery in texture. This wax comes from mealybugs and acts as a safeguard so they can suck your plant dry uninterrupted.

As if that isn’t problematic enough, mealybugs can also spread diseases, so if your philodendron falls ill, its sickness could in theory affect other parts of your indoor garden as well.

Spider mites are practically invisible to the naked eye and could be mistaken for dust on the leaves of a philodendron. Although they’re small, they can do big damage, especially in significant numbers.

The tiny spider mites happily feed on plants, piercing them down to their cells. Like mealybugs, the mites will protect themselves during feeding, this time by making silken webs. They are called spider mites for a reason, after all.

The creepy-crawly aphid, nicknamed the blackfly or greenfly, can be born pregnant so they can spread in huge numbers quickly. Like all the other insects I’ve talked about so far, aphids suck up plant sap. They’re also disease vectors much like mealybugs are.

Once an infestation of insects starts on a houseplant, it rarely gets better on its own. If anything, as the insect realizes it has a free meal in your philodendron, it will settle in and continue having babies and spreading the infestation. Your poor philodendron in the meantime will have lost its leaf rigidity and possibly begun dying.

You can use common household products to combat these bugs such as rubbing alcohol on a cotton swab. Neem oil also works exceptionally well. For aphids, you can flick them right off the philodendron if you’re feeling brave enough! Just make sure you have somewhere to catch and dispose of the bugs so they don’t find their way right back to your indoor garden.

You can grow many, many plants in low-light conditions, including indoor palm trees. These palms should fill the void in your heart that wants a tropical plant in your windowless cubicle.

Make sure that you don’t try to fill that void with a philodendron, as this plant isn’t intended for the dark.

That doesn’t mean the philodendron and its appealing variant, the heart-leaf philodendron, aren’t adaptable to changes in light, as they are. They can get used to less than ideal lighting conditions, even shade.

Yet there’s a difference between a shaded spot and one where the sun never shines and artificial light is never used to take the place of natural light.

It’s the latter kind of conditions that a philodendron can’t handle. You’ll notice that the stems are continuing to grow longer but no other parts of your plant seem to grow anymore. The plants stems are becoming leggy, so they’re stretching towards the light looking for nutrients but that’s not the same as growing.

The philodendron’s leaves, which were once clustered somewhat close together, are now spread inches apart. They also sag and seem limp. These are all signs that the philodendron needs more light, stat!

Just as you can overcompensate for not watering your philodendron enough, you can do the same when it comes to its lighting. Beginner indoor gardeners might make the mistake of moving their plant from a very dark room to one that gets the most sun.

After all, the philodendron is a tropical plant, right?

Yes, but the thing about tropical plants is not necessarily that they grow in an environment of bright sun, just in warm, humid places.

The philodendron’s large leaves can burn in direct sun. Other signs of light overexposure include droopiness and leaf yellowing.

The ideal spot for a philodendron is where it can get bright but indirect light or medium light, which is filtered light. Sheer curtains can diffuse light between the window and the philodendron so it feels the sun but not its damaging effects.

One of the easiest facets of a philodendron’s care is temperature control. The average household or office temperature range of 70 to 80 degrees Fahrenheit is fine for this plant.

Even if the temps dip as low as 55 degrees, such as if you forgot to turn on your office heater before you left work for the day, it’s no harm, no foul for the philodendron.

The problem arises when temps get even lower than 55. You have to remember that the philodendron is a tropical plant, and thus, it can’t tolerate cold temperatures for long. The plant will respond by shedding leaves. The ones that remain will droop.

Make sure you watch your thermostat, yes, but also look around your home or office for other sources of cold air. For example, in the summertime, when you have the AC on, check that your philodendron is not in its path.

Don’t leave windows open near the philodendron on a pleasant autumn afternoon or evening, as it might be too cold for your plant even if it isn’t for you.

In the winter, keep your home or office cozy as well and never put the philodendron outside, even for a few minutes. Philodendrons are sensitive enough that one good freeze could kill them.

The last reason your philodendron could look droopy and limp is due to humidity, well, a lack thereof. As I said before, a tropical plant likes heat and humidity.

The philodendron prefers its relative humidity between 60 and 70 percent.

This is more humidity than the average home or office has by default, so you’ll have the best results if you set up a humidifier in the corner of the room where your philodendron lives. If you have no space for a humidifier, then I recommend buying heartleaf philodendrons only.

The heartleaf philodendrons can live in 40-percent relative humidity, but other varieties of the philodendron cannot.

The leaves of the plant will begin curling either downward or inward and going limp before possibly falling off when the room isn’t humid enough. The leaves that remain on the philodendron can die as the plant is starved of moisture.