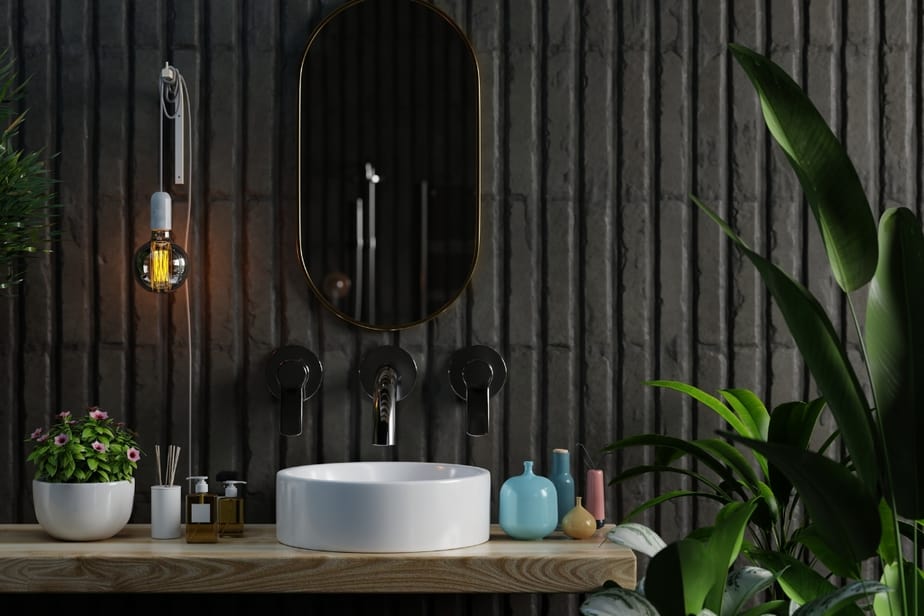 Windowless bathrooms are not only devoid of natural light, but they tend to be humid as well. Choosing the best plants for such an inhospitable environment can be tricky if you’re not familiar with the species that can excel in such an environment.

The following plants thrive in windowless a bathroom:

Ahead, I’ll talk further about each of the windowless bathroom houseplants on the above list, including why they’re formulated for the conditions they can survive in. By the time you’re done reading, you’ll have more than enough great picks to add some greenery to your bathroom!

The air plant is an all-around great pick for a windowless bathroom. Most indoor varieties grow between two and five inches, so you can put an air plant or two on your medicine cabinet.

Air plants need 65 percent humidity, which is over the average relative humidity rate of 50 percent.

They can withstand temps between 50 and 90 degrees Fahrenheit too, so if you like to take steamy showers, that won’t bother the air plant. Bright, indirect light from overhead fluorescent lights will also keep this small houseplant happy.

One such adjective that’s used to describe the cast iron plant or Aspidistra elatior is indestructible, which says a lot about this houseplant.

Humidity isn’t a requirement for the cast iron plant, but this indoor plant doesn’t hate humid conditions either.

It likes temps between 60 and 70 degrees and low-light environments. If anything, strong lighting will brown its mature leaves!

The heat-loving snake plant is a natural addition to this list.

Although it can do just fine in environments with temps of at least 50 degrees, if it gets hotter in the bathroom, you won’t have to worry about the tall, pretty leaves of your snake plant wilting.

The snake plant doesn’t necessarily prefer humid environments but will be okay in them. In a windowless bathroom without a lot of light, expect slower but still steady snake plant growth.

If your bathroom is at least 65 degrees on average, the aloe will be good, and it gladly tolerates temperatures into the mid-80s. Try to use artificial light for the aloe vera to prevent yours from becoming leggy.

Rubber plants love when the temperature and humidity levels of their environment stay about the same, so a windowless bathroom is perfect for them.

By day, the rubber plant’s preferred temperature range is 75 to 80 degrees, and at night, it’s 60 to 65 degrees, which is about normal room temp.

Position your rubber plant so it gets some of that artificial fluorescent glow from the bathroom light, as it prefers bright, indirect light. Without windows in your bathroom, you’re preventing your rubber plant’s leaves from getting burnt by the harsh sun.

Dry air is an enemy of the ZZ plant, so your humid bathroom will lead to more plant growth. With an average size of two to three feet, you can put your ZZ plant on the floor in a corner and it won’t hog up too much room.

Attesting to its hard-to-kill nature, the ZZ plant can handle just about any lighting you give it, from indirect light to low light.

The only lighting condition it doesn’t like is bright sun (it’s prone to burning), which is a non-factor in your windowless bathroom anyway.

If you don’t mind a less variegated arrowhead plant, then you can absolutely put one of these houseplants in a windowless bathroom.

In low light, the arrowhead still grows, but not with as much speed as when the plant has periods of indirect, bright light (like from an artificial bathroom light).

In the winter especially, the arrowhead plant loves high humidity from a warm shower, and it won’t complain if its home is warm the rest of the year either.

You shouldn’t be surprised to see the lucky bamboo on this list. Remember, the Dracaena sanderiana can grow in water, so of course, it loves humidity.

An environment with 50 percent humidity or higher is right in this houseplant’s wheelhouse, and it can withstand temperatures up to 95 degrees. Your bathroom probably won’t get that hot, even without windows, but if it did, the lucky bamboo would love it!

Do make sure you’re prioritizing the lucky bamboo’s lighting. Although the lucky bamboo can live in dark conditions, it might lose its coloring and get a little stretchy and leggy if too far from the only light source.

Too much light is worse, as the leaves will scorch to a crisp.

In a bathroom where you have the space for a houseplant that’s three to five feet, add a dumb cane. Its large, tear-shaped leaves are appealing, and even better, the Dieffenbachia is a humidity lover.

If the humidity in your windowless bathroom exceeds 60 percent, this houseplant is all for it.

It doesn’t like very high temps though. Once it gets over 80 degrees Fahrenheit, the dumb cane can slow its growth.

For a windowless bathroom, I’d recommend choosing a non-variegated dumb cane as they require the least light of all the dumb cane varieties.

The blue star fern is a small houseplant species that hails from South America’s tropical rainforests. Its bluish-green leaves with a wavy shape grow two feet tall, so you can certainly fit one of these plants in a small bathroom.

You’ll love the blue star fern’s temperature tolerance, which is as low as 54 degrees and as high as 81 degrees.

Humidity is a blue star fern’s best friend, and this plant will do best in conditions that are around 75 percent humidity.

Bright, indirect light is its ideal environment, but many indoor gardeners have had good luck growing a blue star fern in a low-light room as well.

Like many of the other plants on this list, the Blue Star Fern will also grow slower and may be a little less colorful due to the absence of light.

Let’s be real, windowless bathrooms can be kind of depressing. Introducing some tropical foliage to your dark bathroom with a philodendron may just turn a depressing environment into a chill and peaceful vibe you’ve been needing.

During the day, the philodendron prefers temps between 70 and 80 degrees. If it gets as cold as 55 degrees by night, this plant is still in the clear.

Humidity levels as low as 40 degrees are fine for the philodendron, but it’s humidity that’s between 60 and 70 degrees where it starts to thrive. So you can see why growing a philodendron in a dark and damp bathroom may be the perfect marriage between plant and environment.

Keep in mind that low-light conditions can make the stems of a philodendron leggy, so try to provide medium-light with an overhead light in your bathroom or a small grow light from time to time.

It’s also worth mentioning that If the plant’s leaves turn yellow, you don’t necessarily have to panic. In addition to improper watering, that’s just what happens to philodendron leaves when they get old.

Indirect light will promote growth for this houseplant, as will average temps of 70 to 75 degrees.

Most variegated indoor plants have very strict lighting requirements, but not so much with the Chinese evergreen.

Low-light and medium-light conditions are best for this plant, mostly because it needs warmth more than it does sun (or artificial light).

Keep your bathroom a cozy 68 to 77 degrees. The higher the humidity, the better for the Chinese evergreen. It likes humidity between 60 and 70 percent.

One of the keys to a healthy, happy pothos is humidity. This houseplant’s leaves can brown and get crispy if the conditions are too dry, so you’re doing the plant a favor when you put it in your windowless bathroom.

You’ll also get closer to the pothos’ preferred temperature range in the bathroom, which is 70 to 90 degrees. If it gets hotter than 90 degrees in your bathroom often, make sure you air out the room. At that temp, pothos growth is impacted.

The pothos isn’t super picky about its lighting, although a bit of indoor light will do this plant good. Partial shade and low light are fine too, but not if your pothos is especially variegated. It will lose its color in a jiffy.

Yet a third fern species for your windowless bathroom is the Boston fern. If you have an air conditioning vent in your bathroom that blows air between 40 and 50 degrees, this fern can withstand several hours of cold air.

The rest of the day, the bathroom temperature should be 60 to 70 degrees or higher if possible.

The small, feathery fronds of a Boston fern will scorch if the light is too harsh, so artificial bathroom light or low light will prevent that unfortunate fate. If you can handle some humidity in your bathroom, so too can the Boston fern.

Humidity levels of 80 degrees or over leave this plant unphased so bring on the long hot showers if that’s your thing.

A tidy three feet in size, the spider plant is my last recommendation for windowless bathroom houseplants. It checks all the boxes, including a preference for high temperatures, this time 70 to 90 degrees.

The spider plant needs lots of humidity to prevent its long fronds from drying out. It will also do well in low light, although you’ll see more growth in moderate, indirect light.