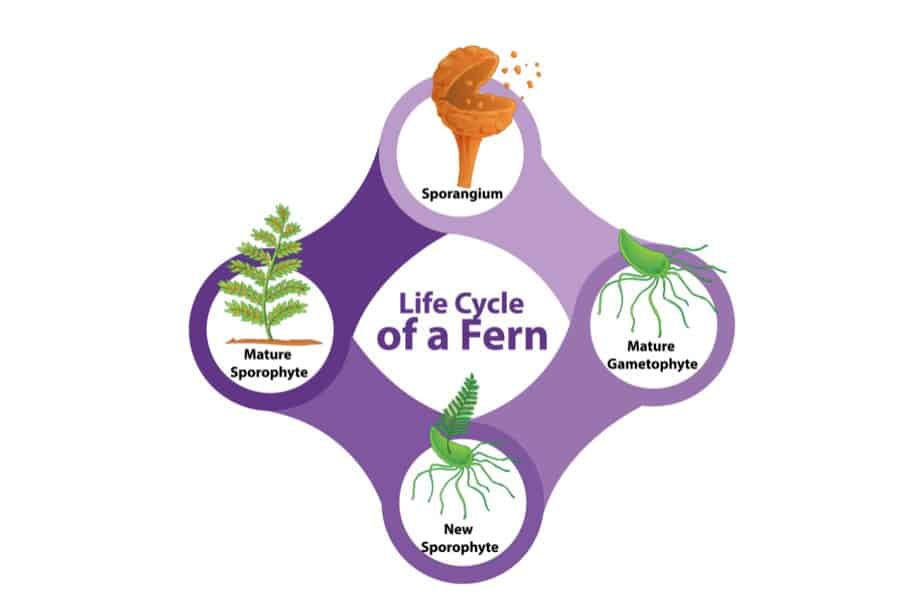 When it comes to growing new plants, the most common propagation methods include using water, soil, and division. Growing new plants from spores is another less common way to propagate new plants! In this guide I’m going to share with you how to collect fern spores as well as how to grow ferns using spores.

To grow ferns from spores, you first need to collect spores. Keep them on damp compost in a shady spot, then give them a few days to a few weeks. The moss-like covering will become a prothallus, and you can soon transfer the newly formed ferns to new pots.

A prothallus? What in the world is that? Don’t stress, as I’ll tell you everything you need to know ahead to successfully grow ferns from spores!

How to Collect Fern Spores

Fern spores are not the ferns themselves.

Rather, they’re on a fern in sporangia, a type of casing underneath the fern’s leaves. There, you can find the spores in groups known as sori, the singular form which is sorus.

Your first order of business is finding spores, so how do you do that? Here are a few options you can choose from.

Look at Your Own Fern Plants

Keep in mind though that many fern species mainly only grow these spores as summer nears its end. That’s not true for every type of fern though, so you might get lucky.

If you’re interested in more information on growing ferns once they’ve taken hold and are fully developed, I recommend reading my related article Are Ferns Easy to Grow Indoors?

Search for Spores in the Wild

If you don’t currently grow any indoor fern species, then perhaps you have some growing outside?

Maybe you know of a neighbor who has a bustling outdoor garden who might let you use their spores.

Over the years I’ve asked employees at garden nurseries if they minded I could take few fern fronds home with me for the purpose of potentially harvesting spores from the fronds and 9 times out of 10 they were fine with it.

If propagating ferns from spores seems like something you’ll do more consistently, you can always become part of international fern societies like the British Pteridological Society or the American Fern Society.

There, you can do a fern exchange with a member, eventually sending them back your fern spores once you propagate a fern.

How Long Are Fern Spores Viable?

Okay, but if you were to join a fern spore exchange, you worry about the time the spores would spend going through the postal service. How long are the spores good for?

Spores are often viable for a year and possibly several years when kept in ideal conditions. A dry and cool environment will extend the length of time spores remain viable.

How to Grow Ferns from Spores – Step by Step

Without further ado, let’s get into what I’m sure you’ve been waiting for, and that’s how to take those fern spores you’ve found and make them into fresh fern plants!

Fern spores are delicate things, so you want to take an equally delicate approach as you collect them.

You might invest in a hand lens, at least a 10x lens, to gauge whether what you’re looking at is truly a group of spores.

Once you’re sure, don’t try to manually dislodge the spores from the fern. Rather, pluck or trim the fern’s frond.

Take the frond home with you. Grab two pieces of plain white paper and sandwich the frond between the pieces.

Ripe spores will release about 24 hours later, and the pattern they create on the paper is pretty cool as well! You might hold onto that.

You might also see some chaff, but you only want the spores. The chaff is a lot fluffier and thus easy enough to tell apart from the spores.

How do you know if the fern spores are ripe? The sori will have a rather scruffy appearance, and the spores be quite firm and plump as well.

The colors of the sori range from green to yellow, black, or brown.

Older sori will always be brown, a hue reminiscent of cinnamon.

Take a seed tray and add peat-free compost, which should be just a few centimeters deep. Moisten the compost with water.

Next, sprinkle the spores onto the compost.

If your spores are by chance still attached to your fern frond, you can turn the frond so the spores are facing the compost and lay the frond down onto the seed tray.

Ideally, the container you use for the fern spores should have a lid. Otherwise, you can use a thick sheet of gardening plastic, which you’ll likely have to if the spores are still attached to the fern.

Cover the spores and then put the container in a spot away from sunlight, as you’ll recall fern spores prefer a cool environment.

Step 4 – Let the Spores Detach (If They Haven’t Already)

The spores have everything they need, so if yours were still attached to a fern frond when you started, that won’t be the case for long.

Within a couple of days, the spores should dislodge from the fern. There’s no need to hold onto the frond anymore, so you can add it to your compost pile.

Even once your spores are free, give them a couple of weeks in their shady environment. Be sure to replenish the water levels of the compost every now and again.

Do not pour water directly on the spores or in their vicinity. The spores are tiny, fragile little things that can easily be washed away!

Step 5 – Wait for Moss to Appear

If you’re patient for long enough, then you’ll notice that the next time you check in on your fern spores, rather than see the dark color of the compost, the entire surface of the seed tray will be covered in green moss.

The spore is not the final stage of the fern at all. Rather, it’s one of the earlier stages.

With time, a spore can become a prothallus, which has an algae or moss-like appearance but is more solid.

Now the spore has entered its sexual or gametophyte stage, which is progress.

The prothallus will eventually develop craters for sperm and egg, and the fern sperm will fertilize the egg, even traveling through water to do so.

That’s how you eventually get to the next life stage of the fern, which is the fern plant itself!

Of course, let’s not put the cart before the horse here. Right now, you have prothalli, and that’s quite exceptional!

All you have to do now is more of what you’ve been doing. Maintain moist compost, keep the emerging fern plants covered, and store them in a cool environment.

The prothallus will eventually go from a moss-like growth to flatter structures with roots and both female and male sex organs.

However, at this stage, the prothallus is incapable of producing its own spores. Rather, it has to wait for the sperm to come from the male sex organs.

Those sperm can swim through the water to find female fern prothallus organs and reproduce.

From there, a zygote will develop, which is the fertilized cell that becomes the fern.

If the reproduction is successful, you’ll know it sooner than later. Teeny-tiny fronds will emerge that look like little plants.

Step 7 – Transfer the Growing Ferns into Their Own Trays

These emergent ferns will continue to grow. Allow them to reach about the length of your thumb, then give each fern its own container to grow in.

Use peat-free compost that you moisten before you transfer the small ferns.

Continued care will produce larger ferns still that will eventually need their own pots.

How Long Does It Take to Grow Ferns from Spores?

Indoor fern plant propagation can sometimes take a matter of weeks, but it’s not going to be nearly that quick when propagating ferns from spores.

It will take at least two or five months for the spores to reach a stage where the prothalli are a solid moss-like mat. Then it can be weeks or even months more for the fertilization and growth of the ferns to occur.

Are Fern Spores Harmful to Humans?

When handling fern spores, do you have to worry about any potential impacts on your health?

If you’re trying to propagate fiddlehead fern from spores, then yes.

The fiddlehead fern has toxic compounds that are more potent from the spring to the summer. Every component of a fiddlehead fern is poisonous to people and animals alike.

Try to limit how often you directly handle fern spores just to be on the safe side, even if they’re from other fern species.

Can You Buy Fern Spores?

Earlier, I discussed the possibility of a fern spore exchange, but what if you don’t want to spend the time waiting for the spores to come in the mail and possibly risk their condition?

Can you buy fern spores?

Yes, you’ll see lots of fern spores for sale on places like eBay and Etsy primarily. You’re not purchasing the spores themselves but rather, fern fronds with spores still attached.

Personally, I’d recommend a spore exchange more, especially once you have the spores to send back. You won’t pay nearly as much money, and by joining a fern society, you can rest assured that the quality of the fern frond and the spores will be exceptional.

link to Are Ferns Easy to Grow Indoors?

Are ferns easy to grow indoors? Well, let me start by pointing out that the fern group has more than 10,500 unique and beautiful ferns species to choose to grow indoors. In this article I’ll share...

A fern can vary in color and texture along the length of its leaves, but becoming brown and crispy are signs that something is seriously wrong with your fern. If your fern is turning brown and...