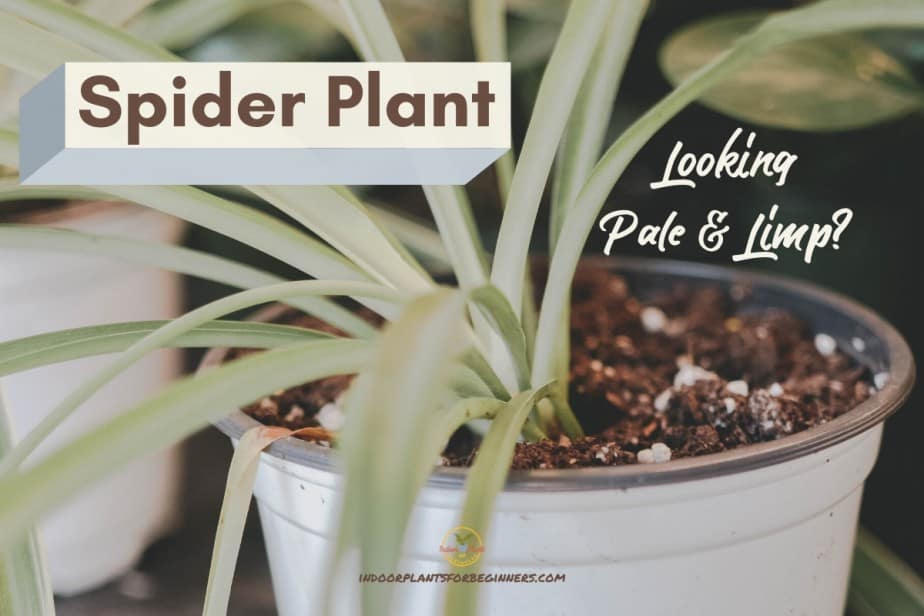 No matter which of the above reasons you suspect may be plaguing your spider plant, we recommend you keep reading. In this article, we’ll explain each potential cause in more detail as well as how to rectify it. Your spider plant is not past saving, but you’ll have to act quickly. You won’t want to miss this!

The natural color variation of the spider plant or Chlorophytum comosum can differ from one plant to another. Your houseplant can be totally healthy with somewhat lighter green leaves. It’s only when the leaves look very pale that you should worry, especially if this recent change in color is accompanied by leaf tip browning and/or limping.

Here’s what causes these undesirable changes in your spider plant and what to do about it.

Let’s set up a scenario that may be all too familiar to beginner indoor gardeners. You bring your spider plant home and excitedly tend to it. You think you’ve found a nice spot for it in the corner of your living room or office. It might get some light there, but then the seasons change.

Now the spider plant is exposed to far less light than it should be. You don’t know any better though, so you keep it where it is. After all, it’s not like your houseplant has died or looks like it’s dying, so what’s the harm, right?

The problem with some houseplant species is that they’re almost accepting of this kind of behavior, even when it’s not what’s best for them. The spider plant will live in dim to low light, so you might not think you’re doing anything wrong. It’s also not thriving. Growth often stagnates, and it’s possible your plant could go limp and pale with time as well.

If your spider plant fooled you into thinking it needed low light, don’t feel bad. This plant has a reputation for its hardiness in less-than-desirable conditions, causing many indoor gardeners to give it too much leeway.

Now that you know better, it’s time to introduce your spider plant to the lighting conditions it’s needed all along.

Perhaps you stumbled into your spider plant’s care routine by chance. You happened to put it out in a sunny spot in your living room or bedroom one morning, then you left for the day. When you came back home, the plant looked good enough, so you kept up with this day in and day out for quite a while.

Recently, something has changed in your spider plant. Where once the leaves were a vivid, bright green, they’ve become whiter. The leaves also lack the stiffness and strength they used to have, sagging instead. To make matters worse, some parts of the leaves look brown.

As we said before, the spider plant is one houseplant species that’s quite forgiving with its lighting requirements. It won’t die in low light, and it won’t outright die in bright light, either. Well, at least not at first.

This indoor plant may enjoy some direct sun, but too much of a good thing can quickly become bad. The sun has the propensity to scorch the trademark long leaves of your spider plant, creating brown spots and tips. If these symptoms are accompanied by paleness and limpness, then something has gone quite wrong.

We people enjoy the warmth of the sun, but it’s no good for our skin long-term. The same is true of your spider plant and its leaves. Remember, it’s better to provide bright, indirect light in almost all instances. This will make the plant feel like it’s getting sun without boring the full brunt of it. As we mentioned, a few hours of direct sunlight are okay if you can be around to monitor your plant and pull it back before it starts burning.

If you’re new to the world of gardening, the idea of fertilizing might make you feel a little unsteady. You’ve read this blog and know that some houseplants need different nutrient ratios than others. They also all seem to have varying fertilizer requirements.

For that reason, maybe you refrain from feeding your spider plant fertilizer too often. You’ve had the plant for a year, and in that time, you fertilized it once, maybe more than that. Just like before, your plant was chugging along fine for a while, but its state has started worsening. It’s got the same issues as it did when you weren’t providing the right light: your spider plant looks colorless and lifeless.

Going forward, if there’s one time of year you want to develop a fertilizing schedule around, that would be the houseplant’s growing season. Your plant needs more nutrients to support its growth then.

Like many houseplants, the spider plant grows the most when the weather is warm, namely the spring and summertime. During those seasons, you can fertilize on a two-week basis or somewhat less often, like monthly.

There are several types of fertilizers that suit the Chlorophytum comosum, but the one you’ll reach for in the hotter seasons is liquid fertilizer. If you do get into a schedule of fertilizing every two weeks, you should keep your eyes peeled for salt developing in the soil. This happens sometimes, and if it does, it could impact water absorption.

If the salt gets deep enough into the soil, you can’t always see it. That makes getting rid of the offending soil next to impossible. Instead, it’s better to refresh the soil entirely and fertilize a little more seldom going forward.

Besides liquid fertilizer, you can try using pellet fertilizer, inorganic, and organic fertilizers for your spider plant.

Here’s a short explanation of each that can help you make a more informed choice when considering a new type of fertilizer for your spider plant.

One area that many indoor gardeners make the most missteps is with watering their houseplants. An underwatered houseplant is not a happy one, but one that’s overwatered is literally drowning, so it’s in even more dire straits.

Your spider plant will inform you that it needs less water if the leaves turn colorless, almost like they’ve been bleached. In other cases, the leaves may look black on the edges. In either situation, you want to scale way back on your watering, only getting into the habit when the soil feels mostly dry.

Grown Too Long in the Same Pot

If you’re still having problems with your spider plant looking pale and limp and you’ve fixed the above issues, there’s still one more thing to change. That’s how often you repot your houseplant.

A healthy indoor plant like your spider plant should outgrow its pot with time. Failing to move it to a bigger environment when that happens can create a troublesome scenario. The plant has nowhere to grow to, which could weaken it and cause limpness. Your spider plant’s roots may also protrude from the pot’s drainage holes, becoming weaker as well and affecting the plant’s appearance.

It’s recommended you repot your spider plant about every year. You definitely don’t have to repot every 365 days on the dot, but use your discretion. If you notice issues like stunted growth or visible roots from the pot drainage holes, those can be signs that you’ve waited too long.

There are a lot more signs for knowing when to repot your plant that you can read about in our article “How Do You Know When a Plant Needs a Bigger Pot” where we’ve covered this in much greater detail. If you’re not as familiar with knowing if you should repot a younger or new houseplant you can also checkout this article that also covers the topic more thoroughly.

Your spider plant will thank you for repotting it. You’re now preventing unnecessary accidents like spills and tumbles because the plant has become too top-heavy. Also, you can ensure the soil quality throughout the year. Once soil becomes impacted or infiltrated by salt from fertilizing, it doesn’t aerate as well. Less water also gets to the roots, which puts your spider plant in harm’s way.

What temperature does a spider plant need?

Known for being quite durable, spider plants can withstand temperatures that dip to 35 degrees Fahrenheit. Considering you keep your plant indoors, we doubt the temps will ever get that low.

You do want to make sure your thermostat is set to at least 65 degrees to trigger growth in the spider plant. It’s even possible for the room to get too hot, as once the temps exceed 90 degrees, the spider plant will transpire more. It could then ingest more micronutrients than usual, even some that are dangerous.

The Chlorophytum comosum grows natively in western Australia and southern Africa. In other words, in its natural growing environment, it gets plenty of humidity. The spider plant also prefers this humidity when grown at home or in your office. If you set your thermostat between 70 degrees, & 80 degrees, and use a humidifier, your spider plant should feel right at home & do just fine.