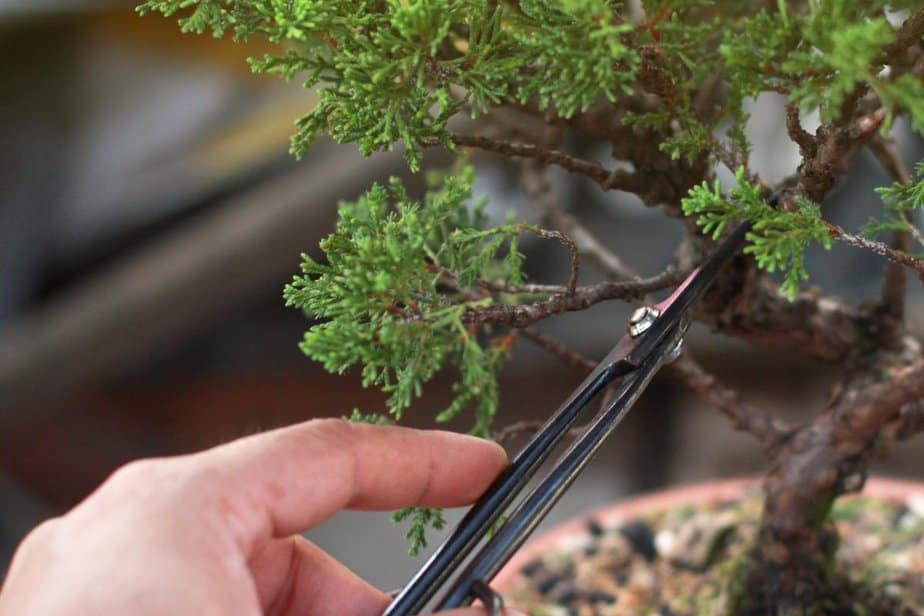 You want to grow a bonsai tree in your home or office, but a variety that’s beginner-friendly. In this article, I’ll introduce you to a bunch!

This informative guide will introduce you to the six bonsai tree varieties listed above. I’ll talk about where each tree comes from, how big it grows, and–most importantly–what kind of care is required to keep it alive.

The 6 Most Beginner-Friendly Types of Bonsai Trees

I’ll begin with the type of bonsai tree that’s largely considered the easiest for beginners to grow, the Ficus bonsai.

A Southwestern Asia plant with hundreds of unique species, the Ficus bonsai includes plenty of dwarf plants among those species.

The Ficus bonsai tree is considered very hardy, which is good news for beginner indoor gardeners.

What kind of care does it require? The Ficus bonsai needs water when its soil gets dry. When the time comes to pour water into its pot, you should water deep into the soil.

The key is to water generously but not overfrequently. Using the fingertip test to gauge how dry the soil is will ensure that doesn’t happen.

Provide bright, indirect light. Periods of bright sunlight in the morning are okay because the light is gentler then. Avoid direct afternoon sun. It’s too harsh and will damage the small, delicate fronds of the Ficus bonsai.

Indoor gardeners have found that the Ficus bonsai is okay in dimmer conditions than ideal.

You don’t even have to check your thermostat all that often when caring for the Ficus bonsai. If the temperatures are over 60 degrees Fahrenheit, this plant is happy.

The Portulacaria afra or jade bonsai has nicknames such as the elephant bush and the dwarf jade plant.

With the right care, a jade bonsai can sprout 10 feet tall! The jade bonsai grows slowly, and with regular pruning, you can control its size so it stays more on the dwarf side. That’s perfect for indoors.

Hailing from South Africa, the jade bonsai features woody, tough stems and small leaves akin to the Ficus bonsai. The jade bonsai’s leaves though are thick like their stems are.

Although the jade bonsai is not a succulent, it behaves like one. In other words, when you water it, the jade bonsai stores some of that hydration in its leaves to use for later.

You can get away with waiting a while from one watering period to the next. The drier the soil is, the more your jade bonsai needs water.

That said, it’s not unheard of for you to water this plant only once every three weeks.

The best way to tell if you’re meeting this plant’s lighting requirements is if you see red edges. These are a sign of a happy plant.

That said, in darker conditions than even bright, indirect sunlight, this plant is usually okay.

Keep temperatures between the 50s and 70s and your jade bonsai will love you for it. Since this temp range is room temperature, you shouldn’t have to go out of your way to adjust the thermostat.

Like a mix of an herb and a bonsai tree in one appealing plant, the rosemary bonsai or Rosmarinus officinalis has a name that means “mist of the sea.”

The tinges of gray in its foliage are certainly mist-like and quite appealing to boot.

Native to the Mediterranean, the rosemary bonsai reaches heights of only five feet.

If you keep your rosemary bonsai in good enough spirits for long enough, you could be fortunate to see it produce blue flowers. Against the needle-like grayish-green foliage, those flowers look gorgeous!

The flowers can linger through summer, and they have a natural fragrance that smells something akin to pine.

Unlike other bonsai trees, the rosemary variety prefers to be watered often. However, the soil needs to stay dry between watering periods. A terracotta or clay pot will help to that end.

Watch that the soil doesn’t get too dry. The rosemary bonsai is not favorable to drought conditions.

A southerly-facing window is the most ideal spot for a rosemary bonsai. There, the plant can drink in at least six hours of full sunlight per day.

The recommended bonsai tree temperature range of 50 to 70 degrees is appropriate for the rosemary bonsai. You shouldn’t even have to touch your thermostat!

You have your pick between three species of the juniper bonsai.

The Juniperus californica or California juniper is a shrub known for tolerating drought conditions.

The Juniperus communis or common juniper looks like the rosemary bonsai, as it too has needle-like foliage. It can handle a variety of conditions, such as being grown both indoors and outdoors.

Finally, the Juniperus chinensis or Chinese juniper twists its trunk as it reaches maturity. This indoor plant is referred to by some as the Hollywood juniper.

These plants reach sizes of about three feet wide and three to six feet tall.

No matter which of the juniper bonsai species you grow, the plant prefers mostly moist soil that’s allowed to get a little dry before you water again. You do not want to let the soil completely dry out though.

When the time arrives to water your juniper bonsai, apply water deep into the soil so the plant is nourished down to the roots.

Bright, indirect sunlight suits this bonsai tree well. Ideally, a southerly-facing window that gets between six and eight hours of sunlight per day is best.

Some shade is okay for the juniper bonsai tree, but for the most part, this plant requires sunlight.

As a frost-hardy plant, the juniper bonsai can handle temperatures down to 10 degrees. You shouldn’t have to worry about it ever getting that cold in your home or office, or so I would hope!

The cotoneaster is a species of shrubs and trees originating in Asia, northern Africa, and Europe.

Many cotoneaster species feature small leaves with a glossy texture. The color of the leaves is usually green but can be red or maroon as well.

In the spring, the cotoneaster bonsai may bloom with appealing white flowers. The flowers are small but lovely.

By the time fall arrives, the cotoneaster bonsai surprises you again, as it could produce fruit. The fruit is shaped like an apple and comes in hues like yellow, orange, or red.

A bigger plant, especially when grown outdoors, the cotoneaster can grow eight to 10 inches tall and up to four inches wide.

When I say the cotoneaster is drought-tolerant, by the way, I mean it.

Some indoor gardeners have found that even if the plant is in such duress that its leaves die from underwatering, some cotoneasters can bounce back fine once you begin watering them regularly again.

Maintain slight moisture in the soil, as overwatering can be deadly to this plant.

Shade-tolerant too, the cotoneaster bonsai grows best in direct sun. Bright, indirect light should work as well, but the plant’s growth might not be as fast as it would be if it got more sunlight.

The cotoneaster is frost-hardy as well, which is why it’s hard to go wrong when caring for this plant. It’s fine in temperatures over 45 degrees.

The last type of bonsai tree to consider adding to your indoor garden is the Chinese elm bonsai.

When grown outdoors, these trees are known to reach dizzying heights of 65 inches. For indoor enjoyment, dwarf versions of the plant are available.

Maintain semi-moist soil for the Chinese elm bonsai. To determine when it’s time to water this indoor plant, feel a half-inch deep into the soil with clean fingertips.

When the soil is mostly dry, then you need to water this bonsai. Try to avoid bone-dry soil conditions for the Chinese elm.

An easterly-facing window is perfect for the Chinese elm bonsai. This window placement will allow your plant to receive bright, direct morning sunlight.

In the afternoon, when direct light is too harsh for this bonsai tree’s tiny leaves, the light is less direct.

Keep temperatures at a comfortable room temperature range of 60 to 70 degrees. Be sure to avoid drafts for the Chinese elm bonsai, as temperature fluctuations can stress out this plant and lead to shock and leaf drop.

Its care is easy!