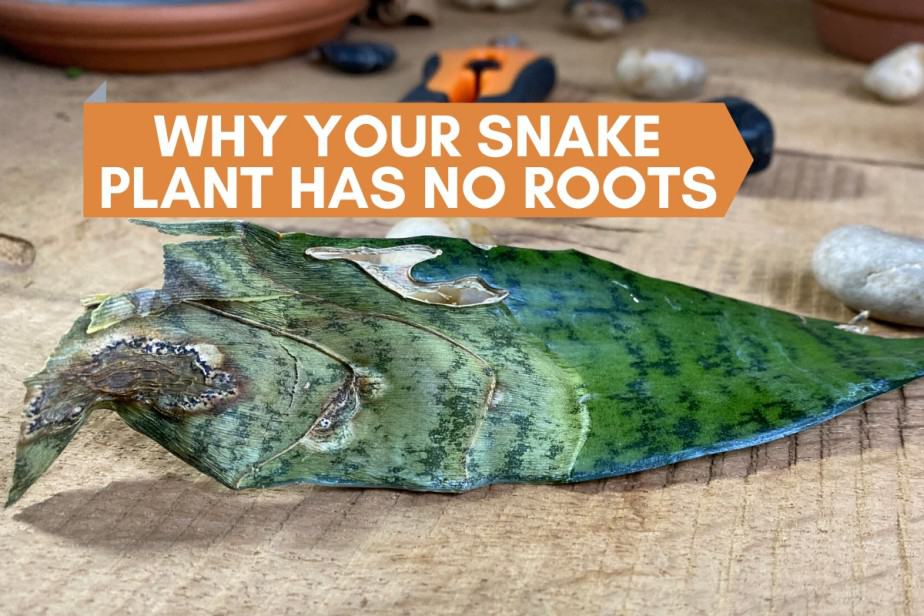 Plants need roots to survive, but it doesn’t look like your snake plant has any. Perhaps you got the snake plant this way from a gardening supply store, or maybe a friend or coworker even gave it to you in this condition. But does this mean your snake plant is dead or can you save it? If you could save a snake plant without roots, what steps could you take to save it?

Why does your snake plant have no roots? Snake plants mainly lack roots because they were damaged by overwatering or because of a fungus that has attacked and decimated the roots beneath the soil. Luckily, you can regrow the snake plant through propagation by doing the following:

In this article, we’ll explore in more detail why your snake plant might lack roots. We’ll also share a lengthier explanation of the steps above so you’ll be ready to get your snake plant back on the right track. So keep reading!

Why Doesn’t My Snake Plant Have Roots?

Putting it simply, the reason your snake plant doesn’t have roots is more than likely because they rotted away due to overwatering.

Now here’s a more detailed explanation. The snake plant or Sansevieria trifasciata has long, tall, pointed leaves that stand straight up. Well, they should. Some indoor gardeners report the leaves of their snake plant tipping over and looking floppy.

This may not happen to all the leaves, but it can afflict a couple of them. It’s definitely a noticeable problem.

It’s also indicative of something more serious, at least most of the time. You see, your snake plant has rhizomes, or a stem underneath the plant, that can produce adventitious roots and shoots or leaves.

The rhizomes, as well as the roots and leaves of your snake plant, will retain the water you pour into its container. You can probably see where this is going.

Recently, we wrote about the difference between watering a houseplant with tap water and rainwater. The latter contains more oxygen, so a soak won’t hurt your indoor plant. Plain ‘ol tap water does not have oxygen, though. When you overdo it on the watering, your snake plant begins to drown.

The snake plant has a reputation as a hardy indoor plant, and it’s true that it is. Just because it can withstand some mishandling doesn’t mean it’s a great idea to do so.

It’s one thing if it’s accidental, but please don’t push the snake plant to its limits, because it absolutely does have them.

When the leaves contain too much water, they can become mushy and fall over. The roots will suffer a similar fate, rotting. Hence why your snake plant lacks roots.

As we said in the intro, you may have acquired a bum snake plant that was already in this poor condition. You could perhaps have someone in your life without a green thumb who gave you their overwatered snake plant.

With such a houseplant, you may notice the leaf clump’s base has a lump but no roots. If you wanted to, you could pull the leaves out of the plant with ease. You’d find they have no roots attached to them.

The confusing part about snake plant ownership is that even in this condition, your Sansevieria could seem okay. As we said, a few leaves could tip over, but not all of them. That could give you a false sense of confidence that your indoor plant is doing just fine. Further adding to that false sense of confidence is that the leaves of your snake plant may look vibrant and healthy.

Don’t be fooled, though.

If the leaves are loose to the touch & can easily be pulled up, right out of the soil, you’ll most likely not see any roots growing out of the bottom of them. At that point it’s very obvious that you’re no longer dealing with a healthy snake plant.

How to Propagate a New Snake Plant Through Pre Existing Leaves

When your snake plant is in this condition, it’s pretty far gone. After all, root rot has taken hold and the roots have died from too little oxygen. It’s a wonder your houseplant is alive, and most other plant species would not be. You can attribute this one to the above-mentioned hardy nature of the snake plant.

Given that your plant seems to be in decent condition, is there any way to recover it and get it to regrow? You can certainly try. It’s possible to take the leaves of your current rotted snake plant and propagate newer, healthier ones.

You’ve already pulled a few sad leaves from your snake plant, and these are the ones you’re going to use for propagation. Now, you may wonder how it’s possible to grow anything from these bad-looking leaves, but we’re not going to keep the dead parts.

With sterilized gardening shears, trim any ends of the leaves that look worse for wear. These may be yellowed if they’re just starting to go. They may also look dark brown or black. Some indoor gardeners have reported the damaged snake plant leaf ends are “melted.”

You want to make small snips, taking care to remove the dead parts. It’s okay if you cut somewhat into the healthy, green part of your snake plant leaves so you’re not too close to the decayed ends, but don’t keep trimming too much higher from there.

Step 2: Treat Your Leaves for Fungus

In some instances, the reason your snake plant has no roots could be because a fungal disease spread across the plant, causing root death. If that’s the case, then following the steps here may not save the houseplant. You might still want to proceed anyway.

You can prevent the development of fungus to your fresh leaves with some cinnamon you have lying around in your pantry.

Take a few pinches and apply the cinnamon on your leaf ends. Then leave them be for at least 24 hours.

While your leaf ends are prepping, you can occupy yourself with the next step of the process, or combining peat moss and perlite into a type of homemade potting mix.

You want equal parts of peat moss and perlite in the mix, about two or three cups of each. The peat moss keeps your potting mix moist so you don’t need to water as often while the perlite provides aeration.

Next, pour in a small quantity of water until the mix feels moist but isn’t soggy.

Fill the potting mix mostly to the top of the pot, leaving ¾ inches of space under the pot’s rim. After that 24 hours has passed, you’re free to take your snake plant leaf cuttings and add them to your new pot with the homemade potting mix.

When placing the snake plant leaf cuttings into the new pot, make sure they’re standing upright. You will have to dig into the potting mix a bit to get them that way so the leaf bases are secure.

Step 5: Be Patient & Continue to Care for the Leaves

With your snake plant leaf cuttings ready to propagate, you can encourage growth by giving them a well-lit environment. Snake plants prefer northern-facing windows because they provide ample light that’s not too direct.

While you wait and cross your fingers for eventual growth, you have to maintain the health of the cuttings. When the potting mix feels dry, it’s time to water it.

You don’t ever want to let the mix get bone dry. Even though overwatering got you and the snake plant in this predicament, underwatering is just as bad. Any roots that could grow will shrivel up if they’re too dry, once again leading to their death.

Keep caring for the houseplant cuttings and, within four weeks, maybe six, they should root to the potting mix. You’ll know that’s happened if the leaves don’t come right out when you give them a soft tug.

Propagation doesn’t always work, and sometimes it’s not because of anything you did. If even a few of the leaves take root, that’s enough. They’ll develop their own new leaves and your snake plant will live on. Even if that doesn’t happen, at least you gave it your best shot.

Tips for Caring for Your Snake Plant

Whether you have a newly grown snake plant to care for from propagation or you went out and bought another plant, you don’t want yours dying on you again. Here are some snake plant care tips to keep in mind going forward:

How do I know if my snake plant has root rot?

If you suspect your snake plant may have developed a case of root rot, there are a few ways to confirm.

You’ll have to take your snake plant out of its pot or container so you can see the roots. Check for mushiness and brownness. If the roots are dying, there’s often a pretty rank smell that accompanies the process. You may also notice the leaves don’t stand, their color is paler, or they look wilted.

Luckily, if your snake plant is in the midst of root rot, you can try helping it. This could save the roots and keep them from dying, meaning you can avoid all the trouble we talked about in this article. The best way to recover a houseplant with root rot is to stop overwatering and repot the plant in drier, healthier soil.

Why is my snake plant skinny?

Snake plants maybe aren’t as lush as some other indoor plants, but they’re not supposed to be slender, either. Why does your snake plan look so lean?

Overwatering can cause changes to the snake plant leaves that may make them look sad, wilted, and skinny. Also, some species of snake plant have naturally slimmer leaves than their counterparts, such as Bantel’s Sensation.