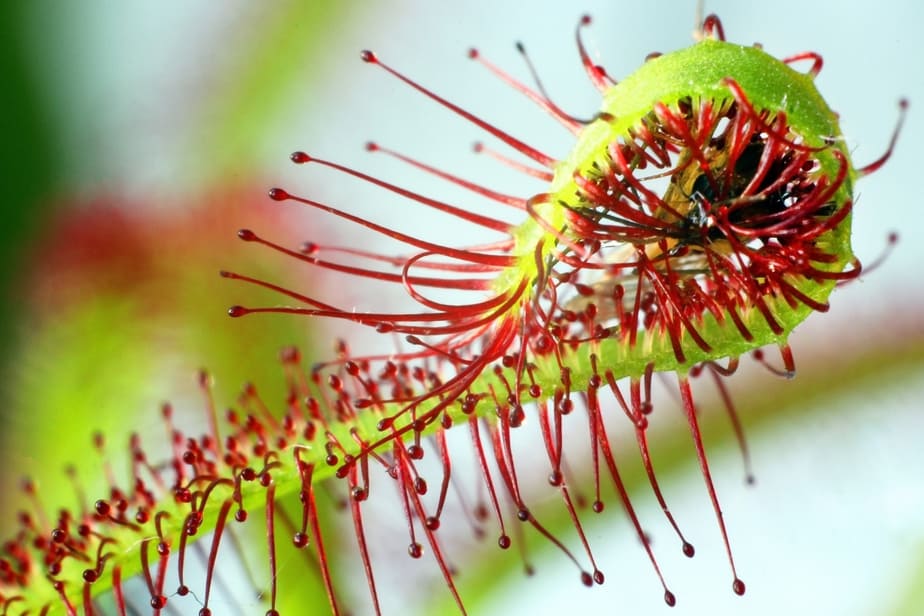 Which plants eat fungus gnats? Carnivorous plants such as the dewy pine, butterwort, and sundew will happily eat fungus gnats, eliminating an infestation in your indoor garden. Butterworts are especially renowned for being able to eat large amounts of fungus gnats.

This guide to natural fungus gnat removal will be full of valuable information. I’ll tell you more about these three fascinating carnivorous indoor plant species that can help with your fungus gnat problem!

Starting my list of indoor plants that eat fungus gnats is the dewy pine or Drosophyllum lusitanicum. The dewy pine is also known as the Portuguese sundew.

Let me make it clear though, the dewy pine is technically not a sundew. It looks like one because it’s related to sundews, but it’s in its own genus.

It’s also not a rainbow plant, but they share some family ties as well.

A peduncle is a stalk with an inflorescence whereas a sessile gland is designed for digestion.

Although the stalks don’t look very big, the dewy pine is more than capable of catching fungus gnats and other bug species like it.

Here’s what happens when a fungus gnat lands on a dewy pine’s stalk. The fungus gnat struggles, which causes more mucus to be released by the carnivorous Dewy Pine plant .

This mucus makes it more and more impossible for the gnat to escape.

Fungus gnats and any other insects caught by the dewy pine will most often die of either exhaustion or suffocation before being ingested by this fungus gnat eating plant.

How do you keep a dewy pine healthy so it can continuously eat fungus gnats?

If your carnivorous Dewy Pine plant is younger than eight months, then grow it in a tray so it maintains constant moisture.

As the Dewy Pine matures, water it when the soil feels a little dry. Never allow the soil to fully dry or the Drosophyllum lusitanicum will become weak and wilt.

Provide full sunlight even if conditions are dry and hot. This plant species and others in the Drosophyllum genus grow natively in northern Morocco, southwestern Spain, and Portugal. They can handle bright light and desert like temperatures.

Provide soil amendments such as sand, vermiculite, peat moss, pumice, and perlite in equal parts. This will keep the soil relatively dry, which the dewy pine will thrive in.

The dewy pine can withstand temperatures that surpass 100 degrees Fahrenheit. Temperatures lower than 20 degrees could cause cold shock symptoms though.

The next plant that eats fungus gnats is the butterwort or Pinguicula.

This genus includes about 80 species, nine of which grow natively in North America.

Most butterworts are tropical and will continue growing and blooming into the winter months.

The other species are temperate and will make a hibernaculum or winter resting bud when it gets cold.

Butterworts have succulent leaf blades that are often pink, light green, or yellow.

The butterwort releases mucus across its leaf that’s noticeably sticky to the touch.

When an insect like the fungus gnat lands on the large leaf surface of the butterwort, the gnat gets stuck on the sticky mucus.

The mucus is designed to look slick like water. That’s what entices a fungus gnat or insect, which is usually thirsty and assumes it found water.

What the fungus gnat or insect found instead was death.

The butterwort has sessile glands that produce digestive enzymes for absorbing nutrients.

The coolest thing about the butterwort is that some species utilize thigmotropism, a form of directional growth in response to stimuli.

In other words, the butterwort can bend the corners of its leaves so the fungus gnat touches even more glands, and escape becomes almost impossible.

Butterworts trap insects with big wings, of which the fungus gnat fits the definition perfectly. Interestingly, if pollen lands on their leaves, the butterwort will still ingest it.

How do you keep a butterwort healthy and happy so it will keep catching fungus gnats and other insects?

By growing it in one of two growth mediums.

Provide bright but indirect light from an easterly-facing window.

The plant should be allowed to receive a few hours of direct sunlight, but either early in the morning or later in the day when the direct sun is not as harsh.

If the butterwort is exposed to the direct sun at the hottest part of the day, leaf burning is likely to happen so avoid placing your butterwort plant anywhere that gets direct sun.

The third carnivorous plant that eats fungus gnats is the sundew or Drosera.

This plant genus has nearly 200 species that grow across all continents save for Antarctica.

Sundews can be subtropical or temperate. The subtropical sundews grow through the winter while temperate sundews will produce a winter hibernaculum.

As has been the case with the other two carnivorous indoor plants I’ve discussed, sundew species have tentacles with glands all over.

The stalked glands release sweet-smelling but sticky mucus that lures in fungus gnats and other insects. A trapped fungus gnat will either suffocate or die of exhaustion.

Then the sessile glands will begin absorbing the nutrients from the fungus gnat.

A sundew is capable of tentacle movement if the plant wants to get nearer to its prey. The tentacles arch towards the middle of the sundew leaf.

This has the same benefit as thigmotropism for the butterwort. The sundew ensures the fungus gnats have connected with as many mucus glands as possible.

Some species such as the Drosera capensis can even curl a leaf entirely around an insect, and it only takes the plant 30 minutes to do this!

To maintain the health of an indoor sundew, water this carnivorous plant to keep its soil moist.

You should only use rainwater, filtered water, or distilled water, as the minerals in tap water can be damaging to this plant.

Create the perfect soil conditions by combining soil amendments such as peat moss and perlite or vermiculite with composted potting soil. The mix is acidic and has good water retention.

The sundew needs temperatures of at least 70 degrees and cannot handle temps under 50 degrees for very long. Make its spot humid with a plug-in humidifier.

Do you still have more questions about natural fungus gnat control? Perhaps you’re wondering what other live creatures can aid you in removing fungus gnats and other pests?

Yes, ladybugs eat fungus gnats. That’s why so many indoor gardeners embrace the presence of certain insects, and the ladybug is one of them.

This cute insect, known as the ladybug, will feast on fungus gnats, helping to eliminate your fungus gnat infestation.

Between having ladybugs around your indoor garden and a few carnivorous plants, your other plants should be free of fungus gnats.

The ladybugs will even consume some of these insects in their larval stages.

I know you might be tempted to squish a spider in your home or office or at least scuttle it out of the house, but don’t. Just leave it, as it’s here to help.

You might have been surprised to not see the Venus flytrap on my list above, but this carnivorous indoor plant won’t help much with your fungus gnat problem.

The average Venus flytrap diet is mostly comprised of spiders, beetles, and other insects that crawl like them.

Flying gnats–fungus gnats and otherwise–aren’t outside of the Venus flytrap’s diet, but only account for a tiny portion of that diet.