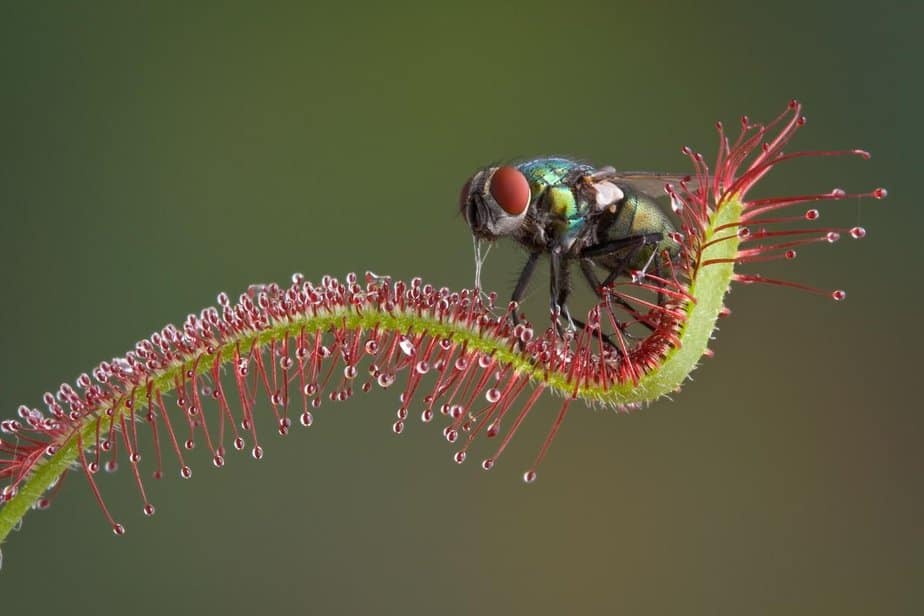 The best carnivorous plants for indoors are:

If you want to add a carnivorous plant or two to your indoor garden, you’ve come to the right place. Ahead, I’ll talk further about the origins of these unique plant species as well as share some care facets!

Of course, I must start this list with the most classic and well-known carnivorous plant for indoors, the Venus flytrap or Dionaea muscipula.

Native to the United States’ subtropical wetlands, the Venus flytrap regularly munches on spiders and other insects.

That explains why it’s such a desirable if not unconventional pick for many indoor gardens.

Its size also helps. Growing a mere five to six inches, the Venus flytrap is a tidy plant for the home and office alike.

I know what you’re thinking, what about its potential to bite you?

Let me explain how the trapping structure of this plant species works. The Venus flytrap has trigger hairs that, when contacted by small insects pests or spiders, will slowly snap closed.

Repeated stimuli must occur for the Venus flytrap to begin digesting what it’s caught to prevent the plant from needlessly wasting energy.

No, if you happen to touch a venus flytrap with your bare hand you don’t have to worry it’s not a poisonous plant. Taking this a step further, venus flytrap bites are not toxic, not dangerous, and some indoor gardeners say “not even that painful”.

The Venus flytrap or Dionaea muscipula is not even poisonous if ingested and is only likely to give you a stomach ache if that.

Venus flytraps don’t need your help staying fed, but you do want to maintain their moisture by watering them regularly. The soil should never dry out.

Provide your indoor venus flytrap bright, indirect light, especially if yours is a colorful Venus flytrap cultivar. Otherwise, its color will fade.

Standard plant soil with amendments such as perlite and peat moss (one part apiece) should be aerating and well-draining enough for this plant.

What Do Pitcher Plants Eat

These plants entrap prey in a different way than the Venus flytrap.

Pitcher plants have a deep, long cavity in which digestive fluid resides. The pitcher plant produces nectar and has brightly-colored leaves to attract insects.

Nectar around the peristome or pitcher rim makes it wet and slippery, so once an insect lands on the rim, they fall into the cavity. Some pitcher plants have aldehyde crystals or waxy scales within that make escaping difficult once in the cavity.

After the insect falls into the cavity of digestive liquid, the carnivorous pitcher plant dissolves the insect completely.

How Big do Pitcher Plant Get?

The average size of a mature pitcher plant is one foot when grown indoors.

Pitcher plants react poorly to certain chemicals such as sodium fluoride found in tap water in the United States.

Depending on the species, the lighting requirements of a pitcher plant vary.

Some types of pitcher plants are more used to rainforest conditions and can grow in dappled or filtered sunlight. Other pitcher plant species can handle direct sun without burning.

Best Type of Soil for your Indoor Carnivorous Pitcher Plant

Rich, well-draining soil is a must for the pitcher plant. Be sure to add moderate amounts of vermiculite, bark, or peat moss.

The Pinguicula or butterworts genus catch food in yet another unique way than the other carnivorous plants for indoors that I’ve discussed.

Their glandular leaves are sticky, and some even say greasy. This feel is due to the mucilage that the leaves secrete via dual glands on the surface of the leaves.

The glands are known as peduncular glands.

Once an insect lands on a butterwort, the peduncular glands produce more mucilage that’s located in a reservoir in the stalks. The more the bug struggles then, the more it seals its own fate.

Butterworts can grow flowers in hues like white, violet, or blue.

If your butterwort comes from a warm region, then its soil should be kept moist to mimic its native environment. Never allow the soil to get dry. Overhead watering suits the Pinguicula the best.

Partial shade is best for some varieties of this carnivorous plant species while others like the full sun. Butterworts are similar to pitcher plants when it comes to ideal lighting environments.

The most ideal growth medium for butterworts is a combination of sharp sand (one part) and peat moss (three parts).

Next are the Utricularia or bladderworts, which include more than 200 species of carnivorous plants, many for indoors.

Attesting to their name, bladderworts contain sizable bladders that act as a means of catching prey.

The bladderwort has trigger hairs near the bladder that prey will contact when they get too close. The negative pressure allows the bladder trapdoor to open so the prey can be pulled inside.

Water enters the bladder too, and when it’s full, the trapdoor closes.

This process can happen extraordinarily fast too, in a matter of 10 or 15 milliseconds!

Bladderworts are another carnivorous plant that’s known to bloom and grow appealing flowers up to four inches in width. The flowers come in a variety of colors, nearly any hue imaginable.

The wetter, the better for the bladderwort, even indoors. If its water has risen over the base of the soil, this is preferable. You might even have a better chance at seeing the bladderwort’s beloved flowers.

Sunny conditions will keep your bladderwort happy, but since this plant has small bladders, too much direct sun can burn it so be careful not to give it too much full sunlight.

A great way to help keep its soil moist is to use plenty of peat moss or sphagnum moss in its soil to keep it moist longer!

With about 200 species, sundews or Drosera are another ultra-cool carnivorous plant to consider growing indoors.

The spoon-leafed sundew is especially popular among indoor gardeners due to its opposing red and green color scheme.

Sundews rose into prominence in part due to Charles Darwin’s research on the plant.

Like some of the other carnivorous plants for indoors I’ve discussed, sundews have glands. the carnivorous Sundews glands are attached to long, sticky tentacles.

The glands are two different types. One is a stalked gland that releases mucilage, and the other is a sessile gland that absorbs nutrients.

When an insect wants to sip on the sweet-tasting mucilage, the stickiness of the tentacles prevents them from escaping the sundew. The mucilage can suffocate the insect, or the bug might die of exhaustion.

Outdoors, sundews can reach sizes of nearly 40 inches tall and 10 inches long, but indoors, they will be smaller. Some sundew species are climbers which is another feature that makes it a great choice for a carnivorous plant to be grown indoors.

How Long Do Sundews Live?

With the right care, a sundew grown indoors can live for 50 years and sometimes longer!

You can use a water tray for the plant and fill it to half of the pot’s height. Always water a sundew with rainwater, reverse osmosis water, or distilled water.

Periods of partial sunlight for several hours and then filtered sunlight suit the sundew best. Avoid dark, even shady conditions.

Indoors, the carnivorous sundews thrive in a soil mix with perlite and sand in an even ratio (such as 1:1).

The Nepenthes genus includes nearly 200 plant species that grow in such parts of the world as India, Australia, Madagascar, Malaysia, Indonesia, and China.

So why are these carnivorous plants that thrive indoors called monkey cups?

The name “Monkey Cups” refers to the anatomy of the meat eating plant.

Monkey cups have a large tube-like appendage that resembles a flute. This is the cup part of the monkey cup.

Inside the cup is fluid that can vary in consistency from thick, viscous, syrupy-like fluid to a more watered-down fluid.

In the fluid, regardless of texture, are viscoelastic biopolymers that can entrap insects, including those with wings.

Even if an insect doesn’t touch the liquid upon entering the cup, the wax coating on the interior of the cup makes it difficult to get out once trapped inside. The peristome or lip is waxy too.

Deep in the cup are glands for nutrient absorption after consuming prey. Then, when finished, a monkey cup can close its top leaf until it needs to feed again.

As it is a carnivorous plant, the Nepenthes must never have completely dry soil.

If your tap water doesn’t have a lot of salt, you can use it to water this plant. However, to be on the safe side, purified water, distilled water, or rainwater are best.

Well-draining, aerated soil mix with pumice or perlite (one part) and peat moss (one part) is a suitable growth medium. The soil should not contain many nutrients from the onset.