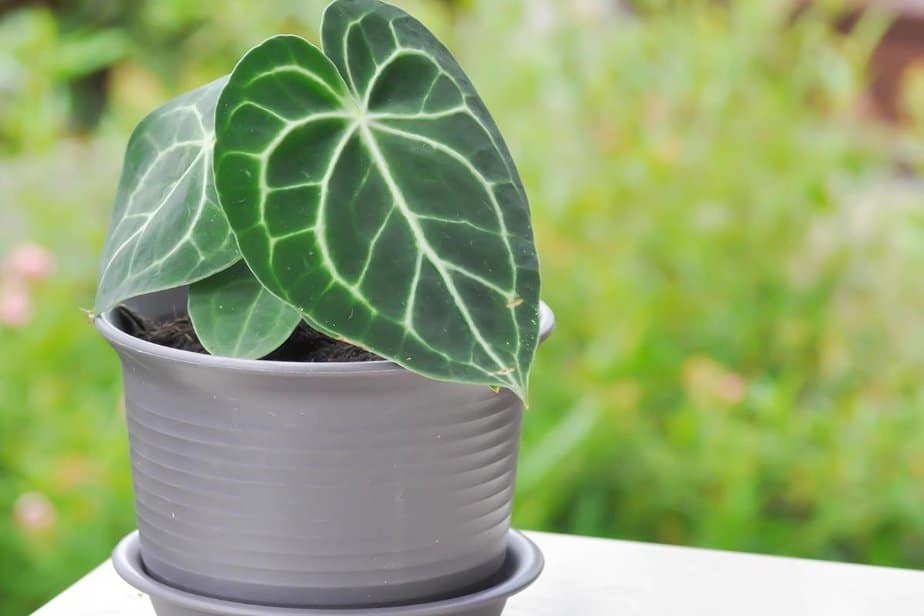 Anthurium Crystallinum plant care can actually be pretty easy if you follow my list of 6 main tips for optimal growth. The anthurium crystallinum captivates many indoor gardeners with its beautiful white veins and large, heart-shaped leaves but once you’ve grown one yourself you’ll find there’s a lot more to love than just its looks.

How to care for an anthurium crystallinum:

This in-depth guide will be full of actionable information for growing a large, healthy anthurium crystallinum of your very own. Whether this is your first anthurium or your fifth, you’ll get its care right this time!

First, what exactly is the anthurium crystallinum? It’s one of more than 1,000 different species of anthurium.

Like its fellow anthurium brethren, the crystallinum is a flowering plant, but what more indoor gardeners tend to pay attention to is the distinctness of the anthurium crystallinum plant’s leaves.

Those leaves are already quite nicely shaped, resembling a heart. They also feature long, angular white veins that are quite attention-grabbing.

There’s a reason this plant has received the Award of Garden Merit from the Royal Horticultural Society.

The anthurium crystallinum can get quite large outdoors, growing up to 35 inches wide and tall. In a more contained environment such as your living room or office cubicle, this pretty plant won’t take up nearly as much space.

What about its flowers, you’re asking? They blend in quite well with the rest of the anthurium crystallinum, as both the spadices and spathes are green. The flowers can blossom any time of the year and are surely a sign of good plant health!

If you look at the two plants side by side, you’d notice that the clarinervium’s leaves are a lot smaller and that the veins are thicker in areas. The crystallinum will grow more quickly too.

The anthurium crystallinum is considered toxic, and that goes for its sap as well. Always wear gloves when handling this plant to avoid getting the sap directly on your skin. It can cause skin irritation otherwise.

Are you ready to get started fostering a healthy environment for the anthurium crystallinum? Here’s what you need to know.

The first area of care for the anthurium crystallinum–watering–is where many new indoor gardeners get tripped up. That’s because this plant requires moisture in its pot, but only its top layer of soil, and just during the active growing season.

The top layer is just that, the top layer. It’s not a quarter into the pot or midway down. If you do the fingertip test and the soil is sopping a few inches deep, you need to reel back how much you’re watering your anthurium.

If you don’t, you’ll create conditions that will lead to root rot, which could kill your plant. As the roots die deep in the pot, those pretty, white-veined leaves of the crystallinum will wilt and become discolored. It’s quite disheartening, to say the least!

As the anthurium crystallinum plant’s active growing season comes to an end, winter will soon follow. You won’t have to water your plant nearly as much since it’s in a state of dormancy.

The more moisture in the air through humidity, the less often you might have to water your anthurium as well. I’ll talk more about the humidity requirements of the crystallinum later in this guide, so make sure you keep reading!

The anthurium crystallinum loves full sun. Since its leaves are so sizable, you don’t have to worry as much about them burning.

Positioning this plant in a southerly-facing window is a good option, as this window angle will allow the crystallinum to drink in sunlight throughout the day. Westerly and easterly-facing windows get the most sun in the morning but less as the day goes on.

That’s fine, as the anthurium likes periods of shade. It’s just like how after you go tanning on the beach for a few hours, it feels nice to sit under a big umbrella.

If your office only has a northerly-facing window then, you can still grow an anthurium crystallinum on the limited sunshine that window will provide.

Some indoor gardeners take a more cautious approach and provide bright, indirect light for their crystallinum instead, which is fine too.

In my experience, even in low-light conditions, the anthurium crystallinum can adapt and thrive.

However, blooming will likely be impacted with less light, growth will slow, and you might not see the full depth of color of the crystallinum. Its flowers will likely not make an appearance either.

The Best Soil for an Anthurium Crystallinum

You can grow the anthurium crystallinum soilless if you choose. For those indoor gardeners who’d rather take the more traditional approach, use a standard potting mix with amendments for water retention.

You have plenty of choices for soil amendments.

Pine bark is one of them. As it introduces porous areas throughout the soil, nutrients can travel to the roots faster, as can oxygen. The bark will also keep the soil moist, which makes your anthurium crystallinum happy.

Coconut coir works well on its own, but some indoor gardeners combine it with peat moss. The coir will outlive the peat moss, as sphagnum expires after about a year.

I’ve seen potting soil recipes for the anthurium crystallinum that recommend adding sand, but I’d caution against that. Sand will dry out the soil faster, which is not what you want for this plant! You have better ways to aerate the crystallinum plant’s soil.

The Best Pot for Growing an Anthurium Crystallinum Indoors

To retain the moisture in the anthurium crystallinum plant’s soil even longer, you need a nonporous pot that won’t absorb water. Plastic is one of the best materials for this, as is glazed ceramic.

Although it’s not the most appealing pot material, plastic is cheap and light. If you drop the pot, it might get dinged or scratched, but it should be otherwise undamaged. You should be able to get quite a long amount of use out of one of these pots.

Please shop carefully if you want a ceramic pot. Unglazed ceramic is very porous, which means it will absorb the water you feed your crystallinum. That will cause you to have to water the plant even more frequently. This can set you up for a case of root rot.

Unlike plastic, ceramic is heavy and not durable, which are two downsides. If you drop a ceramic pot, it will shatter, even if it’s glazed.

Untreated terracotta and clay pots are the worst choices for the anthurium crystallinum, as they also leech out water quickly. If your terracotta or clay pot is glazed and has a plastic liner at the bottom, only then is it appropriate for this plant.

Although its native environment can be quite warm, the anthurium crystallinum prefers temperatures between 60 and 70 degrees Fahrenheit.

This is great news for you, as normal room temperature suffices for this plant. At work and at home, you shouldn’t have to adjust your thermostat to keep the crystallinum happy.

Is the anthurium crystallinum heat-tolerant? To a degree, yes. If the temperatures climb into the 75-degree Fareinheight range, it will be fine. Even temps into the mid-80s are okay but take care not to let the mercury rise too much higher.

By moving your anthurium crystallinum to a cooler place and topping it off with water, it should be fine. Do know that heat stress can cause permanent changes to the way a plant grows if it’s not treated quickly enough?

The anthurium crystallinum is not very cold tolerant. If temperatures drop below 60 degrees Fareinheight, this veiny houseplant could be impacted by cold stress.

Like heat stress, this too is treatable provided you do it quickly enough.

I want to remind you to avoid other sources of heat and cold in a room such as vents, leaky doors and windows, and appliances like your washing machine or fridge.

For comparison, the average household relative humidity is 30 to 50 percent. You’ll need a humidifier to keep the air moist for the crystallinum.

If the leaves of your anthurium crystallinum feel crisp to the touch rather than soft and velvety and you’re sure you didn’t underwater this plant, then check its humidity. The crystallinum likely needs more moisture in the air.

The Best Fertilizer to Use When Growing an Anthurium Crystallinum

The anthurium crystallinum responds best to organic fertilizers, which often include ingredients like carbon, guano, seaweed, peat, worm castings, and manure. Buy a slow-release fertilizer, which will send out nutrients gradually over the coming months.

Since this type of fertilizer isn’t fast-acting, you want to apply it either before the active growing season starts or right when it begins. That means fertilizing in the late winter or early spring.

The nutrients in the fertilizer should be enough to last for three or four months, just when the active growing season is winding down.

The nutrient ratio should not be the same for all three macronutrients in the fertilizer, which are nitrogen, phosphorus, and potassium.

Instead, the fertilizer ratio should read 3:2:1 so it has plenty of nitrogen and phosphorus especially. The latter can help your anthurium crystallinum produce flowers.

Another nutrient that’s highly recommended for the crystallinum is magnesium. It helps chlorophyll take solar energy and use it to photosynthesize, which in turn keeps your anthurium crystallinum looking green and healthy (well, except for the veins).

Since magnesium is not one of the main three macronutrients, you might have to research fertilizer brands a little more thoroughly to find a product with it in there. It’s worth it though for the lush foliage your anthurium crystallinum will produce.

Before applying fertilizer to the anthurium crystallinum, dilute it down to 20 percent strength. Always read the manufacturer’s instructions for the quantity of water to use for dilution.