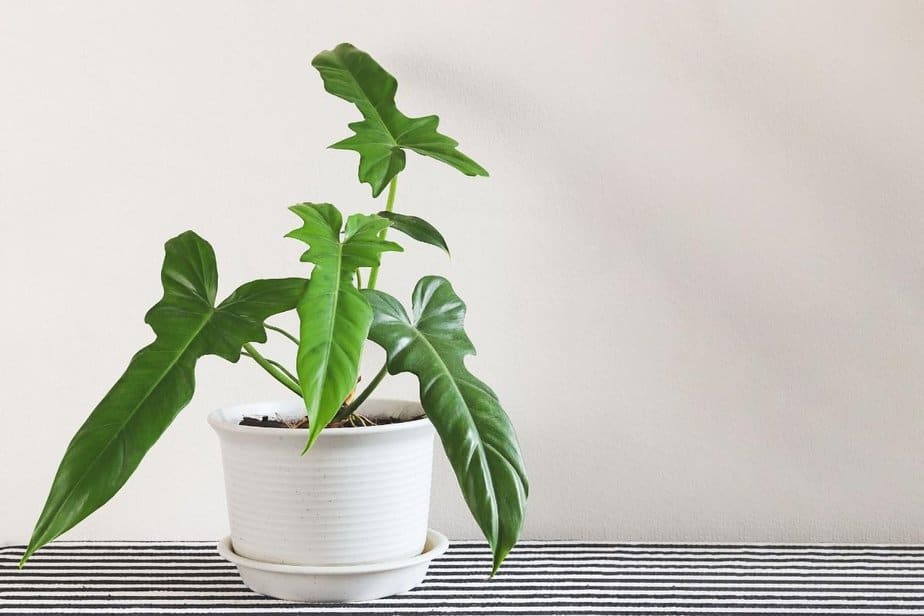 The philodendron golden dragon is an appealing philodendron variety, but how do you care for it? I’ll tell you everything you need to know in this guide.

Growing the philodendron golden dragon plant for the first time can be an immensely rewarding experience when you follow the information in this guide, so make sure you keep reading!

The philodendron golden dragon, despite the name, is not golden in color at all. Rather, its leaves stay a uniform shade of green.

The shape of those leaves is what’s so prolific, as the long leaves have jagged and curved edges at various points to create quite a unique shape.

Although not a rare philodendron variety, per se, the golden dragon is not the most widely known or widely available philodendron in garden supply stores.

You might have to purchase yours online if you’re that eager to have one.

When mature, a golden dragon will grow anywhere from six to 12 inches long to start and can ultimately surpass 25 inches. They’re considered fast-growing plants but need the proper care to thrive.

Your golden dragon is a plant that cleans the air. It will pay you back for your time and work by getting rid of benzene and formaldehyde.

Philodendrons are excellent at clearing pollutants from the air, after all!

I’m sure you’re ready to get into how to care for the philodendron golden dragon by now, so without further ado, let’s go over the care facets from the intro in a lot more detail.

Hydrating the golden dragon is a must, so keep up moist soil around the clock.

In between waterings, give the golden dragon a bit of a rest and let the soil dry out a smidge.

You can use the fingertip test as your gauge when you should water again.

The fingertip test requires you to insert a clean finger or two into the soil to feel how wet it is.

The soil should be dry several inches down before you water the golden dragon, as that’s how you prevent the soaking soil this indoor plant detests.

I do want to stress that overwatering is one of the chief issues when it comes to tending to this philodendron variety.

When a plant is overwatered often enough, it’s likelier to develop root rot, a fungal disease that kills the plant from the roots to the tips.

You’ll know your golden dragon needs water less often if the leaves begin drooping, the foliage turns yellow or brown, the base of the plant is mushy, and especially if you notice visible mold.

As you might have guessed then, when the months grow colder, such as in the autumn and definitely into the fall, you need to reduce how often you water this philodendron.

The golden dragon falls into a state of dormancy during the colder months.

That’s no excuse to stop watering it altogether, of course.

The fingertip test will continue to guide you regarding watering frequency.

The Correct Lighting for the Philodendron Golden Dragon

Lighting is an area where the golden dragon differs from a lot of philodendron plants.

Allow me to explain what dappled light is.

Dappled light comes from the canopy of overhead trees. The leaves of the trees produce holes of varying sizes for sunlight to pour in.

Since this light is direct, it’s sufficient for the golden dragon.

The best way to create bright, dappled light indoors is to position a larger plant between the golden dragon and direct light.

Outside of that, you can also finagle with the window blinds or use a mesh strainer to recreate the effect, although natural is always better.

Although the golden dragon likes bright light, that only goes for dappled light. Exposing the philodendron to bright light without dappled conditions is going to be far too harsh.

What will happen is you’ll dry out your poor plant. Its leaves can begin to fry, turning brown and crispy.

If not brown, then your plant’s foliage might appear faded and almost bleached. This is a sure sign that your golden dragon is sunburned.

As moisture is stripped from the plant, it can’t stand upright so it will sag and droop.

Pruning away the affected leaves is the only remedy, as those leaves can never heal after incurring damage. Produce more dappled light in the future as well.

Soil and Pot Requirements for the Philodendron Golden Dragon

What kind of soil should you use for the golden dragon?

This philodendron prefers standard potting soil, but make sure it’s well-draining above all else.

Well-draining soil doesn’t deplete water from the soil immediately but doesn’t allow the water to overstay its welcome, either. It’s perfect for a picky plant like the philodendron golden dragon.

An airy soil mix is also good, as hard, compacted soil crushes down on air pockets and gives water nowhere to drain.

To keep the golden dragon’s soil in usable shape for a long time, I recommend soil amendments.

Perlite is just what you need for this philodendron variety. Not only can it limit soil compaction, but it can also provide aeration and enhance water drainage.

For those new to soil amendments, perlite is a type of volcanic glass that’s incredibly porous and light.

Okay, so you’ve got your potting soil, but what type of pot best supports the golden dragon?

Well, you want a pot material that retains moisture but not for too long, so I would suggest glazed ceramic or clay.

Normally, ceramic and clay are two of the most absorbent pot materials you can get. When they undergo glazing, their porosity is reduced somewhat.

The materials can still absorb water, but the water will have more time in the pot than usual.

That said, if you still feel like the water you use to replenish your golden dragon is gone in the blink of an eye, consider adding a plastic liner to the bottom of the pot.

Temperature and Humidity Requirements for the Philodendron Golden Dragon

Proper temperatures are a must for sustaining healthy indoor plants.

So what temperatures does this philodendron require?

That’s a bit cooler than most philodendron varieties like it, as those plants prefer temps between 60° and 85° Fahrenheit.

This plant does have upper and lower temperature limits just like any other.

Be sure not to surpass 85 degrees, which is quite hot for the golden dragon.

If the temperatures climb above 85°, you may see signs of duress akin to an underwatered or sunburnt plant.

In other words, the golden dragon will become burnt, drooping, limp, and experience leaf discoloration.

If your philodendron is suffering from any of the above issues, I recommend reading my related article, Philodendron Looks Droopy and Limp? (Here’s Why).

The lower temperature limit for this philodendron is 50 degrees.

Your plant could experience cold stress. At the very least, you’ll see symptoms like stopped growth, leaf yellowing, and wilting.

In the most severe cases, the golden dragon could experience tissue death. As you probably guessed, that’s a permanent affliction and requires you to remove dead leaves.

Keep the golden dragon away from air drafts, especially cold drafts such as from an air conditioner or an old drafty window or door. Heat sources such as a refrigerator are just as damaging.

The golden dragon is a humidity lover, ideally preferring humidity at a high rate of 60 percent.

That exceeds the average relative indoor humidity, which is between 30 and 50 percent. That said, the golden dragon is okay in humidity ranges of 40 to 50 percent.

You can test the humidity at home or at the office with a hygrometer.

Be sure to use a humidifier or move the philodendron to your bathroom (space permitting) if it needs more humidity.

When the golden dragon begins its active growing season between spring and summer, it’s time to fertilize.

Just ensure the fertilizer has a good amount of the macronutrients potassium, nitrogen, and phosphorus in equal measure.

When applying fertilizer to the golden dragon, keep the stuff at least five inches from the plant’s base to avoid damage.

Once the summer wanes and that fall chill comes into the air, it’s time to stop fertilizing until next year.

If you continue the fertilizer schedule, then you risk overfertilizing your poor plant.

The golden dragon can suffer from fertilizer burn, and the salts that accumulate in its soil will be hard to remove.

You’d either have to get rid of all the soil currently occupying the philodendron’s pot or you’d have to flush the soil with water.

How will you know you’ve gone too far with the fertilizer? Your golden dragon will tell you, don’t worry.

You’ll see symptoms such as reduced or stopped growth, dead roots, browning on the leaf margins and tips, and a telltale white fertilizer crust.

If you keep your philodendron golden dragon healthy, then pests and diseases are far less likely to afflict it.

In weakened plants, these insects can sometimes still get through, so know what to look for and how to remove them.

What diseases can afflict the philodendron golden dragon?

This hardy plant is mostly disease-resistant, but it will readily succumb to root rot.

As I touched on earlier, root rot is a fungal disease that kills your indoor plants from the roots up.

It’s caused by oversaturating your plant in water, sometimes through compacted soil but much more often from overwatering.

When the water in the golden dragon’s pot has nowhere to drain, it saturates the roots, choking off the oxygen supply in the interim.

The roots, without oxygen, begin to die one by one.

When root rot gets serious enough, the rest of the plant will begin to show it.

You’ll notice symptoms such as leaf discoloration (including browning, yellowing, or even whitening in some cases), a reduction in the number of branches, stopped growth, and paler, smaller leaves.

By removing your golden dragon from its pot and trimming off the dead roots, the plant may survive.

That will only happen if the philodendron has enough healthy roots to promote its survival. You’ll also have to reduce overwatering again or root rot will recur.