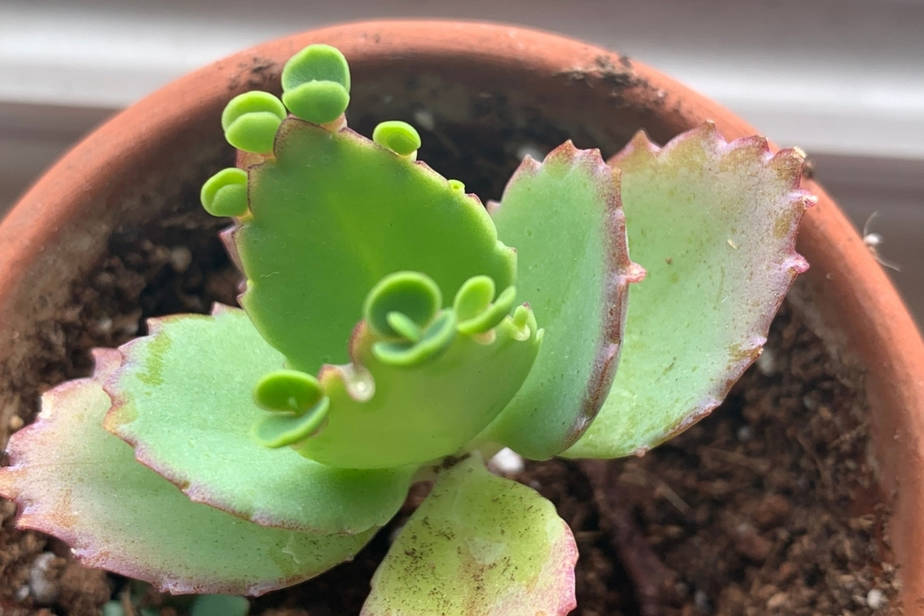 I’m sure you’re eager for even further specifics on caring for a mother of thousands, and I’m here to deliver. This article will serve as your complete guide for growing this fascinating succulent species even if you’re new to the plant!

First, a brief explanation is in order so you can better understand the plant you now proudly own. The mother of thousands or Kalanchoe daigremontiana belongs to the Kalanchoe genus, which was once called the Bryophyllum genus.

If those names aren’t confusing enough, it’s also referred to as Mexican hat plant and alligator plant. So whether you’ve heard one of those names before or a couple of them, they all refer to the Mother of Thousands plant.

Growing natively in Madagascar, the mother of thousands is a succulent that’s most commonly green. In some instances, the leaf margins and veins throughout can be streaked with a beautiful darker hue such as magenta.

The mother of thousands contains daigremontianin, a bufadienolide or steroid that’s toxic.

Keep this plant away from cats, dogs, and small children. Always be careful when you handle it as well.

Why is it called the mother of thousands, you ask? On each of its large leaves, the Kalanchoe daigremontiana develops small, circular spurs. For every spur, a plantlet with roots can form, so this plant could theoretically grow thousands of itself!

The mother of thousands can flower, and its blooms sprout in colors like orange or very light pink. How often this plant’s flowers appear isn’t quite understood, but it’s not necessarily a yearly event. There’s even less likelihood of the flowers blooming when grown indoors than outdoors, but it can happen! It’s just very rare.

Caring for the Mother of Thousands

Now that you’re clearer on the basics of the mother of thousands, let’s dive right into the care this unique succulent requires.

Watering a Mother of Thousands

If this is your first succulent, then scaling back on how often you water your plant will feel strange at first, but it’s a must. The mother of thousands and other succulents can retain water in their fleshy leaves, necessitating far less frequent watering than non-succulents.

I recommend the fingertip test to determine how much moisture the mother of thousands is maintaining in its soil. Clean your hands and then stick a finger two inches deep into your plant’s pot. If your fingertips come back wet, then wait several more days and repeat the test. Don’t water your mother of thousands plant in the meantime.

If the soil is moist but a little dry, test again in a day or two and gauge how the soil feels then. When the soil is free of moisture but not before it’s bone dry, that’s how you know it’s time to water your mother of thousands. Avoid wetting the plant itself as you water it. Know also that this succulent is rather sensitive to how much water it receives.

It’s also sensitive to water temperature. Use room temperature water only, even through the winter. By that time of year, you’ll water your mother of thousands less frequently than you will in the spring and summer.

Since the mother of thousands doesn’t like too much water, you must take care to avoid the development of root rot. This plant condition is caused by overwatering a plant. The water saturates the soil and prevents oxygen from getting to the plant’s roots, drowning the plant in its pot.

The first signs of overwatering a mother of thousands is usually its leaves, which are no longer able to maintain their rigidity.

The leaves may wilt too. They’ll also change colors. If you can mitigate the issue early, then root rot might not advance to the point where your mother of thousands will die.

If the roots of this plant are mostly black and dead, then due to the mother of thousand’s heightened sensitivity to water, you might not be able to save the plant. You can still try by removing the dead roots with clean pruning shears, repotting your plant in drier soil, and more closely monitoring how often you water the plant going forward.

The Best Lighting for a Mother of Thousands

The Republic of Madagascar that is home to the mother of thousands receives more than 3,000 sunlight hours per year, so this succulent will want to soak up lots of sun in your home or office.

However, this doesn’t mean you should expose the plant to direct light. Its small spurs can burn right off in the sun and the rest of the leaves could be sunburnt. Bright, indirect light suits the mother of thousands far better.

What is indirect light? This form of sunlight passes through a medium before reaching your mother of thousands. That medium can be as simple as a curtain or a drape, anything that prevents the plant from receiving the full brunt of the sun.

Moving your plant too much can be quite stressful, so try to choose a spot for your mother of thousands that will work all year long. Then, ensure the plant receives six hours of sunlight per day.

On those overcast and rainy days or in the winter when every day seems drab and bleak, use artificial light.

Best Potting Soil for a Mother of Thousands

As a succulent, replicating its native conditions in its soil will keep your mother of thousands healthy. That means sandy soil.

Above all, the soil must be well-draining. To reiterate, the mother of thousands is sensitive to too much water. Water that gets entrapped within the soil can also lead to root rot even if you’re watering your plant at the correct frequency.

Some indoor gardeners enhance the drainage capabilities of the soil with amendments. Vermiculite is one such amendment that keeps the soil light and airy so it drains well.

Moderately sized chunks of pumice rock will create gaps throughout the soil. You might also add perlite.

The succulent potting mix shouldn’t contain loam or peat moss, aka sphagnum. These amendments, while appropriate for other types of plants, will maintain water in the plant’s pot for too long, which the mother of thousands is not receptive to.

Best Type of Pot for a Mother of Thousands

The type of pot you select for your houseplants matters not only for the pot’s appeal but for your plant’s health as well. Some pot materials retain moisture well while others leech moisture out rather quickly, and it’s the latter type you need when growing a mother of thousands.

Terracotta is among the best types of pots for this succulent species. Moisture that enters a terracotta plant such as when you water your mother of thousands will soon seep right out, preventing conditions that are conducive to overwatering.

Always buy unglazed terracotta pots instead of glazed ones. The glazing is designed to keep more water in the pot, and you know by now that that’s not favorable for the mother of thousands. Avoid plastic liners within a terracotta pot as well, as the liner is designed to do the same thing.

The price of a terracotta pot can be rather reasonable or quite expensive depending on the size, style, and quality of the terracotta. The more money you pay for the terracotta, the longer it should last you.

You might need a large terracotta pot for the mother of thousands. This isn’t great considering that terracotta is quite a weighty plant pot material. If you drop it, the pot will likely break since it’s brittle.

The Ideal Temperature for a Mother of Thousands

As I always say on the blog, just because a plant grows in a hot native environment doesn’t necessarily mean it likes high temperatures. That’s the case with the mother of thousands. Its temperature preferences are room temperature, between 65- and 75-degrees Fahrenheit.

You’ll recall from earlier that the mother of thousands is quite sensitive to water temperature extremes, and that applies to the air temperature as well. Maintaining the thermostat is not enough.

You also must confirm that where in your living room or cubicle you put the mother of thousands is not in the direct path of other sources of air.

Rethink putting your plant in the kitchen, as there are too many sources of heat, from the stovetop to the oven and even your refrigerator’s heating element.

What about humidity levels for the mother of thousands? There’s no need to go out of your way here. Relative humidity of around 40 percent is ideal for this plant, and that’s attainable in a room temperature environment.

Best Type of Fertilizer for the Mother of Thousands

Like many houseplants, the mother of thousands’ active growing season is in the spring and summer. About every three months from March until September, apply fertilizer.

How do you fertilize the mother of thousands? Water the plant first, as this prevents the roots from burning due to the fertilizer application. After watering, the fertilizer will be able to travel throughout the plant’s pot with more ease as well.

Dilute the fertilizer before applying; refer to your fertilizer’s instructions for the exact number of gallons of water per tablespoon of fertilizer for dilution.

It’s better to use a little less fertilizer than recommended and see how your plant responds than it is to use more. While you can remove fertilizer from a plant’s pot, doing so isn’t easy.

If your mother of thousands is suffering from fertilizer burn, then that’s a clear sign that you’ve added too much. The symptoms can include withering leaves, brown and yellow discoloration, and streakiness in hues like brown, yellow, or white.

You can save your mother of thousands from fertilizer burn by acting fast. Remove the plant from its pot. To do this while minimizing damage to the plant, ask a friend or family member to help. You should hold the base of the plant while they grab the pot and pull on it until the houseplant is free.

Remove as much fertilizer-laden soil as you can, replacing it with fresh, unfertilized potting mix. Water your plant to allow the rest of the fertilized soil to flow out of the pot.

How to Prune a Mother of Thousands

Is your mother of thousands looking a little spindly or wiry? Before you start pruning, first make sure the plant isn’t leggy because it’s not receiving enough light.

Once you’re sure the extra growth is just that, extra growth, it’s time to get pruning your mother of thousands. You don’t need pruning shears for this job. Instead, put on some gardening gloves, find the leaves with the most growth, and then grip the extra growth from the top.

Pinching the growth will cause it to come off. The leaves that appear now will be nearer to the stem than they were before.

I do want to caution again that the mother of thousands is a very toxic plant. If you forget the gardening gloves, avoid touching your face until you can wash your hands thoroughly with soap and water.