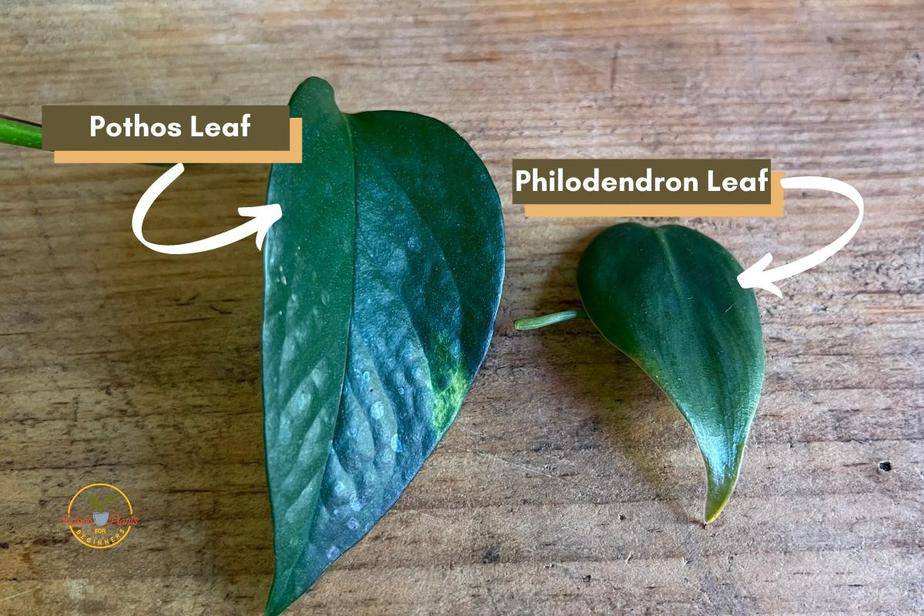 Philodendron and pothos are often confused with one another, but once you’re made aware of their many differences, you’ll have no trouble telling them apart. In this Philodendron vs. Pothos guide, I’ll tell you what their differences are and what to expect when growing either plant.

If you want to learn even more about how philodendron and pothos are unalike, or if you’re not sure what cataphylls are, this article is for you!

Philodendron vs. Pothos – 8 Easy Ways to Tell Them Apart

Pothos Is Known for Its Aerial Roots

Some indoor plant species have aerial roots, which develop above the surface of the soil.

With aerial roots, a plant is well-nourished, has excellent air exchange, and can more easily be propagated.

Instead, philodendron’s roots are usually subterranean, which are the standard plant roots that grow below the surface.

Should you spot an emergent aerial root or two on your pothos, many indoor gardeners leave the roots be. They’re not hurting anything, after all.

If you decide that the roots absolutely must go, then use clean gardening scissors or pruning shears to remove them.

Trim the roots near the pothos main stem. If you cut there, you shouldn’t harm the pothos in any way. It will continue growing as usual.

Another more technical difference between philodendron and pothos is the shape of the petioles.

A petiole is another word for a leafstalk. The leafstalk connects the plant leaves to the stem.

Both pothos and philodendrons have petioles, but the shape and size of the stalks make it easier to determine which plant is which.

The pothos features a grooved petiole. The leaves don’t necessarily attach to a stalk so much as they do a vine. After all, the pothos is a trailing indoor plant.

A philodendron’s petiole is smooth and round. It’s also noticeably smaller than a pothos petiole.

Pothos Has Wider, Thicker Leaves with a Waxy Texture

Philodendrons are beloved for their heart-shaped leaves, as this is one of the most defining trademarks of this indoor plant species. Those cartoonish heart shaped leaves are not something you will see in a pothos.

The differences in the texture of the leaves is another giveaway.

When you touch a pothos leaf, you’ll notice that the leaf is almost bumpy and raised. This is subtle, but it’s there.

Touching a philodendron leaf produces a different sensory experience altogether. The leaves of a philodendron are smooth from top to bottom but aren’t textured.

Now, I should note that some philodendron cultivars do break the above rule, such as the Philodendron micans.

The philodendron micans variety has a velvety texture across the leaves. Even still, a fur-like texture is not the same as the waxy feel of a pothos leaf.

If you’re still struggling to differentiate the two indoor plant species, compare the thickness of the leaves. Pothos will have much thicker leaves than philodendron.

Before I get into this next difference, allow me to explain what a cataphyll is.

Known also as a cataphyll leaf or a cataphyllum, a cataphyll is a leaf present on a plant that’s reduced in size compared to the rest of the foliage.

The larger leaves on a plant are known as euphylls or true leaves whereas a cataphyll is not.

The euphylls will drive photosynthesis in an indoor plant. Cataphylls provide structural support, plant protection, and storage of water or nutrients.

Both types of leaves are important, but obviously, euphylls are much more critical to a plant’s survival. That’s why not every indoor plant species has cataphylls.

When a new leaf emerges on your pothos, it will start tightly curled. As the plant matures, the leaf unrolls little by little. Its color is lighter than mature pothos leaves.

This is temporary though. As the new pothos leaves grow, the color will eventually become unified with the rest of the plant.

The cataphylls or sheaths that surround the new leaves will eventually disappear as the plant matures. First, the cataphyll dries up, then it sheds from the leaf and often drops from the philodendron plant entirely.

As I mentioned in the intro, how you care for pothos and philodendron will take you down different paths, especially when it comes to watering.

You should allow at least one inch of topsoil to dry out before watering the philodendron. Maintain slightly moist soil throughout the pot.

The philodendron is moderately drought-tolerant making it able to longer periods of time without needing to be watered.

What’s far more detrimental to the long-term condition of your philodendron is overwatering. Standing water and soggy soil can cause root rot.

As for pothos, rather than just allow the top inch of soil to dry out, the entirety of the pothos soil should dry before you water this plant again.

Another noticeable care difference between pothos and philodendron is in the former plant’s preferences for heat.

The pothos prefers temperatures between 70 and 90 degrees Fahrenheit. That’s rather balmy, but not so much to a pothos.

This indoor plant species hails from subtropical and tropical forests around the world, everywhere from the West Indies to the Pacific Islands, South Asia, Southeast Asia, Australia, and South Africa.

The philodendron cannot handle high temperatures to the same degree as pothos. Its ideal temperature range is 70 to 80 degrees.

Now, a difference of 10 degrees might not seem like life or death, but that’s exactly what it can be in some instances for an indoor plant.

In very high and very low temperatures, plants can experience symptoms of stress and shock. Usually, these symptoms cause leaf wilting or shedding, foliage discoloration, and other signs of duress.

Without changing the plant’s conditions though, the plant can eventually die.

Although heat and humidity often get lumped together, the two are not the same. Humidity is a measure of air moisture whereas temperature determines how hot or cold the air is.

An indoor plant might not like high heat but prefers more humidity. That’s true of the philodendron.

Compare that to the humidity requirements of pothos, which are at least 50 percent and sometimes higher.

When growing either of these great indoor plants, you must use a humidifier or another means of making the air moister.

I’d suggest growing your philodendron or pothos in a part of the house that’s regularly humid such as a bathroom.

Philodendron Can Grow in Dimmer Conditions

Philodendrons are considered rather versatile, especially when it comes to how much lighting they receive. In indirect light or medium light, your philodendron should still thrive just fine.

Your philodendron plant won’t die from indirect light or low-light but it won’t thrive and flourish with leaves.

Pothos, on the other hand, is okay in regular potting soil if it drains well. The soil does not have to contain any nutrients.

The level of acidity either plant prefers in its soil diverges as well.

Pothos needs a pH range of 6.1 to 6.5, veering into neutral territory. Philodendron demands a soil pH of 5.0 to 6.0, which is more acidic.

People sweat when they’re warm, but should your pothos plant do the same? Something doesn’t seem right about that. Is your pothos hot? Should you move it somewhere cooler? Why is it sweating? I...