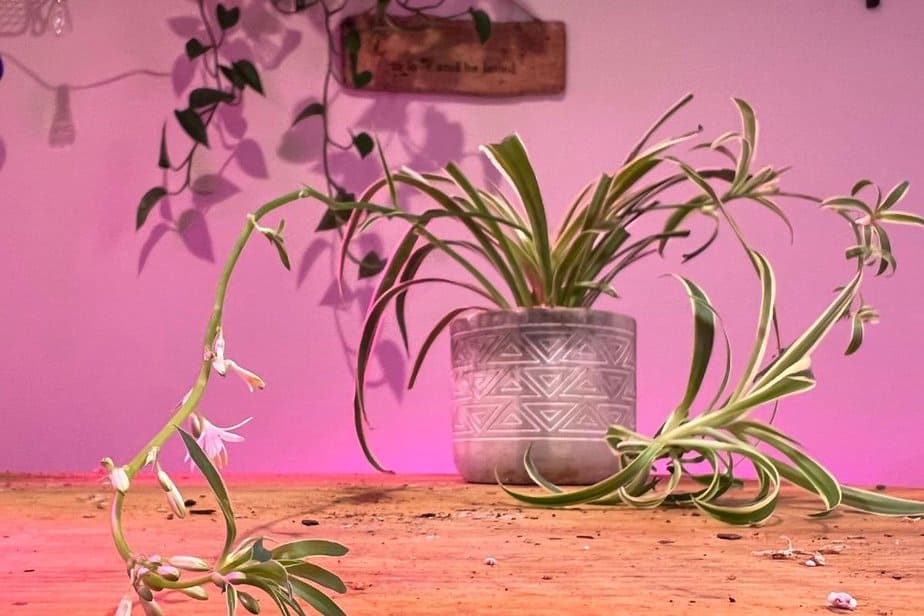 If you’re growing a mature spider plant “Chlorophytum comosum” you might be wondering what to do with spider babies, also called “spiderettes” and “plantlets”, that your spider plant produces. I’ll do my best to walk you through the options as well as the proper steps for propagating and handling the spider plant babies.

These are your spider plant baby options:

This introduction to spiderettes will explain in detail what a spider baby is, how to remove it, and how you can use the offshoot to grow even more spider plants. If you have a spider plant in your care right now, this article is for you, so keep reading!

What Is a Spiderette or Spider Baby?

A spider baby or spiderette is an offshoot of a spider plant. It’s technically a plantlet, or a miniaturized version of the fully-grown plant.

Your spider plant must have reached maturity for spiderettes to develop.

Spiderettes will usually appear during the summer. They start as flowers. Without pollinating the flowers, they will become spider babies.

(FYI, if you do pollinate the flowers, then no spiderettes! You’ll just have lovely flowers instead.)

Once the spider babies grow, it’s nearly impossible to miss them. Your spider plant will begin producing trailing vines full of smaller spider plants often referred to as spiderettes.

If your spider plant has developed spiderettes, it’s a sign that your plant is healthy and happy. It’s being cared for sufficiently enough that it can sustain additional growth (the spider babies) as well as its own.

What Do You Do with Plantlets on Your Spider Plant?

You checked your spider plant and identified some spiderettes. This is very exciting, but what do you do with them?

If you’re not interested in propagating, even still, you don’t want to leave the spiderettes attached indefinitely. Allow me to explain why.

Whenever a plant produces new offshoots, it’s dedicating some of its energy to that growth. It’s not like offshoot growth is a single-time thing, though.

Once the offshoot develops, your plant needs to sustain it. That takes energy as well.

Plants only have so much energy to spare.

A plant that uses all its energy for growing and maintaining offshoots–such as a spider plant with spider babies or spiderettes–will not have enough energy to grow further.

Your plant can eventually end up in a kind of stagnant holding pattern.

Pruning the spiderettes will help to an extent but removing the spider babies from the plant entirely is better.

Now your spider plant will have the energy to grow. It remains to be seen whether it develops new spider babies, but the possibility exists!

How to Propagate a Spider Plant from Spiderettes

Propagating your spider plant will lead to more spider plants, and who doesn’t love that?

If you have a few naked corners in your indoor garden, the growing spider plants will fill in the gaps nicely. Propagated plants also make an excellent gift for friends, family, colleagues, and just about anyone.

Your spider plant is giving you several free opportunities to propagate through its spiderettes, so be sure to make the most of it! Here’s how to propagate the offshoots.

The spiderettes are still attached to the mother plant at this point, but on their vine, they should have begun growing their own roots.

Some indoor gardeners will propagate spider plantlets even before any visible roots develop. If you’re more experienced at propagation, then you can try this.

However, for first-time spider plant propagators, it’s best to allow the spider babies to grow their own roots.

This way, when you plant the spiderette in its growth medium, its existing roots can take hold and grow long and strong from there.

It can take several weeks to a month for the spider babies to develop roots, so you will have to be patient for a little while.

If the roots are only nubs, then while the root system has started to grow, it’s not strong enough yet.

You’ve determined that now is the right time for removing the spider baby from the mother plant.

I recommend having a pair of gardening shears handy, but you might not necessarily need them.

In some instances, you can pinch the spiderette at its base and it will come right off. Some loosely-hanging spider babies might detach if you disturb them slightly.

If these spider babies have roots, then you can still propagate them.

For the ones you have to trim, cut the plantlet so you retain as much of its roots as you can.

Then sterilize your gardening shears. You have your pick between isopropyl alcohol and bleach for this.

If you select isopropyl alcohol, its formula should contain at least 70 percent alcohol and up to 100 percent.

When your gardening shears are clean, you can prune your mother plant, removing the long stems that no longer have any spiderettes. Now your spider plant can focus on its own growth.

Be sure to disinfect your gardening shears again when you’re done. This is the best way to prevent the spread of disease.

Step 3 – Plant the Spider Baby in Water or Soil

Next, it’s decision-making time. You can opt to plant your spider baby in soil like a traditional indoor plant or you can grow it in water for a spell.

Should you choose water as your spider baby’s growth medium, then fill a glass or jar with lukewarm water.

Use distilled or filtered water rather than what comes from your tap, as that might be hard water that contains too many minerals.

Insert your spider baby into the jar, ensuring its roots are saturated but its leaves are not.

If you’d prefer soil for your spider baby, I’d recommend a separate pot for the plant than the pot the mother plant is growing in.

The reason? The soil that fills the mother plant’s pot may contain fertilizer and other minerals that can be too harsh for a spiderette.

Plus, your new spider plant needs lots of room to grow, so give it its own pot.

Your spider plant is all situated in its growth medium. Now you need to tend to it.

That’s right, your growing plant still needs care, although not as much as a mature spider plant.

You must keep conditions moist but not soaking. If you’re growing your spider baby in water, then disregard this. The spiderette’s conditions are moist enough.

That said, you do want to change out the water in the spider baby’s jar or vase about weekly or when it gets murky, whichever comes first.

Provide indirect light for your spider baby. Its environment should be warm, but the plantlet should never receive direct sunlight, or it could burn.

Step 5 – Wait for the Spider Baby to Take Root

The great thing about propagating spider plants is that it takes only a few weeks for the spiderette to begin rooting.

These plants also propagate rather successfully almost every time, which can instill confidence in indoor gardeners who are new to propagation.

Step 6 – Transfer the Plant to a Pot with Soil

Did you choose to propagate your spider baby in water? This indoor plant can’t grow in water indefinitely, so once it has a healthy root system, it’s got to move.

Put the growing spider plant in its own pot that’s full of well-draining, loamy soil. Continue tending to it as you have.

When your spider plant matures, it prefers temperatures over 65 degrees Fahrenheit and bright, indirect sunlight. You should allow as much as 50 percent of its soil to dry out before watering it again.

Before you know it, your propagated spider plant could begin growing spiderettes of its own!