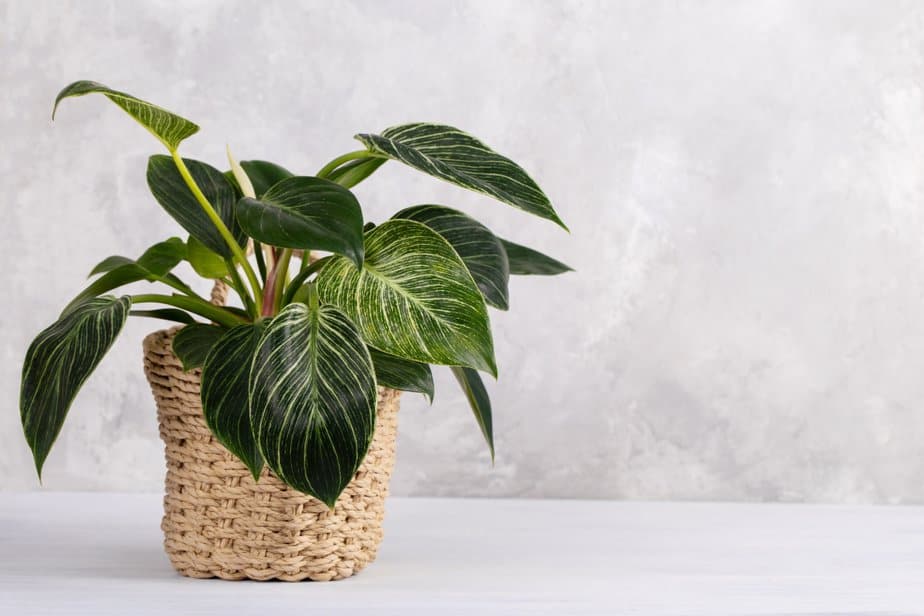 Caring for a Philodendron Birkin means following a few tips on upkeep. This plant care guide will provide all the care instructions for this unique philodendron variety!

Ahead, I’ll go in-depth on how to care for the Philodendron Birkin so you can have one happy, healthy houseplant!

How Do I Make My Philodendron Birkin Happy?

The Philodendron Birkin is a rare philodendron variety with stunning white variegation across its leaves.

Establishing the proper care now will set the stage for your Birkin to flourish, so let’s go over how it’s done!

Water the Birkin when the top inch or two of the soil feels dry. Depending on the size of its container, this will probably mean watering your Birkin every seven to 14 days.

I recommend starting off watering the plant once every two weeks, especially in the winter, and then making adjustments as needed depending on how your plant is responding.

In my experience, the Birkin is better at dealing with dry soil than it is mushy or soggy soil.

The Birkin will need more water in the spring than it does in the winter, and then even more water still in the summer.

Rather than water every seven days, you should put a finger in the soil to feel how wet it is two inches down.

When you feel no moisture at all is when it’s a good time to water the Birkin.

Be ready to scale back your watering habits yet again in the autumn.

The Philodendron Birkin does not like to be rootbound, so you’ll need to repot yours every year.

It usually only takes a single growing season for the Birkin to already be far bigger for its pot than it should be.

How can you tell? The Birkin’s roots might emerge from the pot’s drainage holes, or perhaps the roots will rise close to the surface of the soil.

Neither is a good situation, as the plant is likelier to become rootbound once its roots grow out of control.

When upgrading your Birkin’s pot, you must choose an appropriate pot size. If you go too much bigger, then the soil can easily absorb moisture beyond the amount your Birkin is comfortable with.

The pot should, at the very least, be an inch bigger than the Birkin’s current pot and up to two inches bigger.

Your Birkin might experience a touch of transplant shock from its move, but this is largely inevitable.

Although it’s sad to see shedding leaves and other signs of duress from your plant, continually providing the right care and giving it time to recover should help the Birkin bounce back.

When it comes to the type of light a Philodendron Birkin likes, that’s bright, indirect light.

Remember, the Birkin is a variegated plant, so anything less than bright, indirect light will reduce its variegation to plain greenness.

Once that happens, it’s a permanent change, so you have to maintain its variegation over its life.

Bright, indirect light is easy to provide for an indoor plant. All you need is a northerly or easterly-facing window with a curtain affixed to it.

Southerly or westerly-facing windows are too harsh for the Birkin. You don’t want to burn its leaves. Those dark brown leaf tips are just as permanent as the fading from lack of sunlight!

I do want to take a moment to talk about the Philodendron Birkin’s variegation pattern over its lifetime so you don’t panic and think you’re making a lighting mistake.

When the Philodendron Birkin is young, its leaves will be primarily if not entirely white. That’s also the case for any new leaves that will emerge from the plant.

As the leaves mature and grow in size, their variegation naturally changes. You’ll see that rather than the white dominating the leaves, it’s now growing in stripes across the leaves.

Those stripes become narrower and narrower until the most mature leaves will turn dark green.

So how do you know if your Birkin needs more light or if the plant is just growing?

The leaf size will be an indicator. Larger leaves that have less variegation are supposed to be that way, but smaller, younger leaves should not have much if any green.

A plant also grows toward whatever meager light source it has when it’s starving for sunlight, so if your Birkin is leaning, that’s a sign it needs more sunlight.

The plant can also become leggy, developing long stems with few if any leaves.

Do I Need to Prune My Philodendron Birkin?

No, you do not need to prune your Birkin in the traditional sense.

The only times you’d prune a Birkin would be to remove dead or dying parts of the plant you’re unable to revive.

If you must prune your Birkin, then I recommend using gardening shears or scissors for the job. You shouldn’t need any larger tools, as you might risk lobbing off too much of the plant!

You might want to wear gloves to be on the safe side, but that’s about the only protective equipment you need.

Always work with clean shears. You can use either bleach or 70 percent isopropyl alcohol to disinfect the shears.

Only soak the blades, especially when cleaning with bleach, as it can stain.

Find the philodendron’s leaf node, which is where a new white leaf will emerge, and trim above that so you leave the nodes intact.

The dead parts of your Birkin come in handy for a compost pile!

Unfortunately, pests are attracted to your Philodendron Birkin not only for its beauty but for its warm environment and high humidity.

Spider mites are the most common species you’ll find, so it helps to learn to identify them.

These Tetranychidae family members are part of roughly 1,200 species, so it’s hard to say which type of spider mite you could be contending with in your indoor garden.

Spider mites will hide out underneath a plant’s leaves, so peer under your Birkin to look for signs of the mites.

The longer that spider mites are left to linger on the philodendron, the likelier you are to spot the silken webs that these mites leave behind (why do you think they’re called spider mites?).

That’s not to say you should ignore spider mites – anything but! The insects can pierce into the leaves of the Birkin and suck them dry, leaving dry, limp foliage in their wake.

How do you get rid of spider mites once they invade the Birkin?

Coat both sides of the Birkin’s leaves with the alcohol and water mixture and then dab away the excess moisture with a soft microfiber towel or a paper towel.

It could take repeated instances of doing this before the mites disappear.

When it comes to cats and dogs, keeping the Birkin away from these four-legged friends is best.

The Philodendron Birkin plant isn’t toxic to the touch, but it is poisonous if eaten.

You might want to rethink growing the Birkin at home if you have pets. That’s also the case for children!

Is Birkin a Fast Grower?

A Birkin can sprout up four inches per week, so if you miss its white variegation, it should only be a matter of time before new leaves emerge that are creamy white from top to bottom.

If your Birkin is growing slower than usual or if its growth has stalled, that’s a huge indicator that something is wrong with the plant.

A lack of sunlight can stop the Birkin in its tracks while being fried from sunlight overexposure can also disrupt growth.

Failing to fertilize the Birkin is another problem. The plant needs a balanced liquid fertilizer with a macronutrient ratio of at least 10-10-10.

Dilute the fertilizer to half its strength and then apply monthly in the spring and summer during the active growing period.

The Birkin also needs the right lighting, temperatures (65 to 85 degrees Fahrenheit), and humidity (between 40 and 70 percent) to grow.

Philodendron Birkin leaf colors are not quite so black and white (err, green and white) as what I’ve talked about to this point.

Leaf discoloration and shape deformities can occur as well, so let’s talk about why and what to do about them!

Finding the leaves of your Birkin turning yellow is a sign that you’re watering the plant too frequently.

Remember, you’re supposed to let the soil dry out an inch or two deep and then water. If you’re not following that recommendation, then you risk oversaturating the Birkin.

This increases Birkin’s chances of developing the fungal disease root rot, which could spell its end.

Underwatering the Birkin can also produce yellow foliage. If the conditions continue, then those yellow leaves can become dark, crispy, and brittle.

On the other hand, brown leaves on your Birkin can be caused by light oversaturation.

The Birkin is perfectly contented with bright, indirect sunlight. Periods of direct sun can be too much for this plant’s foliage, burning the leaves to a crisp.

Before the leaves turn brown, they usually appear white, but since the Birkin has white variegation, this stage of plant sunburn is easy to miss.

If your Birkin is receiving optimal levels of light, then check how often you’re watering it. Leaf browning can be a symptom of both overwatering and underwatering.

If the leaves on your Birkin are curling, then one or two issues are going on.

One is that your plant is dry.

The Philodendron Birkin could have dried out from a lack of water or positioning the plant too close to a source of air such as a return vent or a radiator.

The dryness can also be caused by a lack of humidity. The Birkin needs high humidity, more so than the average home or office might contain.

Use a hygrometer to measure the humidity in the air and then treat your plant to a humidifier.

If not dry, then the Birkin could be cold.

Philodendron Birkin cannot handle temperatures below 60 degrees and will stop growing. If the plant freezes, it could die!