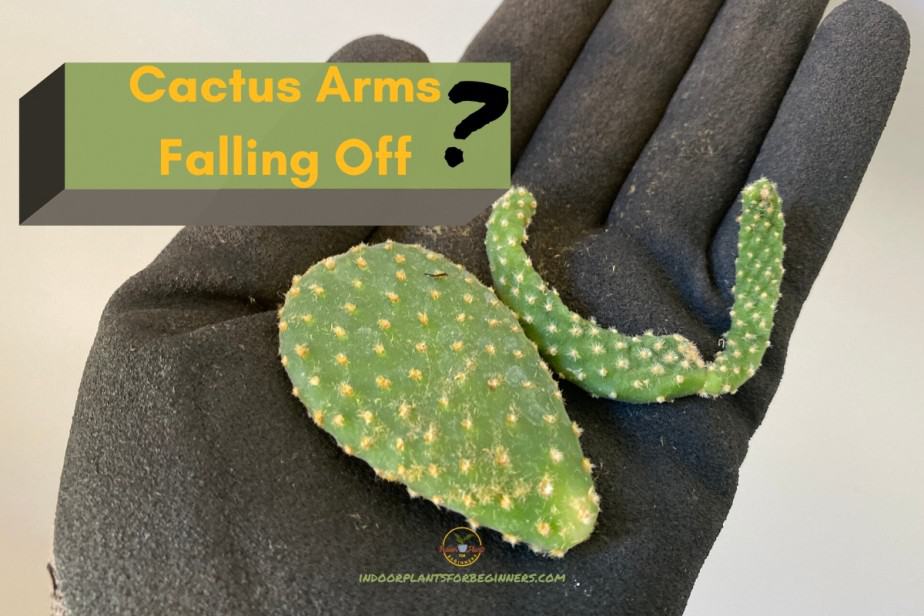 You don’t expect your cactus’ arms to necessarily last forever, but you didn’t anticipate them falling off, either. Yet that’s the situation you’ve found yourself in, and honestly, you’re not sure why the arms fell off or what to do with them now.

Why do cactus arms fall off? Cactus arms usually fall off for a few common reasons, including:

If you’re curious to learn, in detail, why your cactus’ arms may have fallen off your beloved cactus then keep reading. In this article, we’ll elaborate more on the most common reasons a cactus may lose its arms as well as what you can do to get your cactus back to looking even fuller and healthier.

The Reasons Cactus Arms Fall Off

Hopefully, you’ve never touched your cactus with your bare hands, as you would likely receive a prickly surprise for your troubles. Still, even just looking at the succulent, it seems pretty sturdy. It’s not like most houseplants with thin stems and fragile leaves. You figured your cactus could withstand more than the average plant…until you came home and saw yours sans a couple of arms.

First, let’s dive deeper into the points we touched on in the intro as to why and how this could have happened.

You know cacti love their humidity, with most requiring it at about 40 percent. Rather than always run a humidifier in your home, you decided to give your houseplant some time outdoors in the summer heat.

For a while, your cactus seemed to thrive. Then you had a bad rainstorm and forgot to bring the plant back indoors. When you came out after the rain, your poor cactus had been tipped over on its pot. You picked it back up and saw it had lost a few arms in the storm.

If you leave your cactus in your home or office, it won’t necessarily keep its arms. Continuing with external factors, you could have all sorts of incidents occur. For one, something or someone could tip the plant to the floor indoors, again leading to the loss of a cactus arm or two.

Even if you’re very careful about where you place your houseplant, something else could always fall on it. Maybe you have kids who throw something in the cactus’ direction. A shelf could come loose and tumble down. Any one of these situations and many others could transpire, but the result is always the same: your cactus is in bad shape.

Given that a cactus is a succulent, you know it can go longer without water than many other houseplants you keep. The problematic pattern some indoor gardeners fall into is forgetting to give the cactus water at all.

On average, you should aim to water your cactus once a week to every two weeks. Some indoor gardeners do it a little more often and others a little less. As long as your houseplant isn’t going super long without water, then you’re okay.

You can tell your cactus is starving for H2O if it begins to shrivel. At this point, all the leftover water it had stored within it to save for later is now depleted.  Should you not notice your cactus has shriveled up and continue to not give it water, the entire structure of the cactus weakens. It’s feasible that the arms could fall off in such a state. That is, if the plant survives at all.

Like with many indoor plants, overwatering a cactus is just about as bad—if not worse—than underwatering it. At least with an underwatered plant, you can get on a regular watering schedule and save it with little damage done.

Overwatering can trigger root rot, which can be reversed if you catch it soon enough. Once root rot progresses to the point where the roots are smelly and mushy though, it may be too late to help your houseplant.

A cactus that’s showered with too much water won’t begin rotting right away. In fact, just the opposite may happen. Your plant will look better than ever, lulling you into a false sense of security. You’ll continue watering too much because it seems like your cactus loves it.

As the roots of your cactus die, the plant’s exterior appearance changes as well. It too will begin dying, but before it gets to that point, it softens. A softened cactus with a mushy, deteriorating inside is in the perfect condition for the arms to fall off.

Can You Graft the Broken Arm Back onto the Cactus?

Alright, so the worst has happened, and your cactus is down an arm…or two (or three). This isn’t ideal, but the rest of your cactus seems to be okay. If you haven’t underwatered or overwatered the plant, then that’s probably true enough.

It doesn’t seem right to throw your cactus in the trash then, as it’s still alive. What you’d like to do is replace the broken arms. How do you go about doing that? Is it possible?

Many indoor gardeners (myself included) have successfully grafted the broken cactus arm(s) back onto the cactus. Whether this is an option for you, depends on the state of the cactus and the state of the broken off arm. If the tissue looks wrecked and the arm itself has edges that are jagged, it’s probably not going to work as is.

If your cactus arm is in good shape, or you’re willing to cut the stub of your cactus and the broken arm so both are even and clean then you’re ready to try to graft them together. You might even want to take the arm off a cactus of a related species and graft it onto the broken cactus.

Here are the steps to follow if grafting is the direction you want to go.

Step 1: Invest in a grafting knife if you don’t already have one. It will allow for the cleanest cuts so grafting can be successful. If you want to graft your broken cactus in a pinch but you don’t have a grafting knife, most sharp, straight kitchen knives can work. Just make sure it doesn’t have a serrated edge and be sure it’s clean before using it.

Step 2: Cut down the broken part of the cactus arm. You can also chop off a piece of another cactus to attach to the original one. This piece would be known as the scion. No matter which method you choose, the new arm should be roughly the diameter of the old one.

Step 3: Look at your cactus where the arm was. There should be a tube or ring-like pattern in the exposed area. These tubes are referred to as phloem and xylem. Together, they make up your cactus’ vascular cambium. Think of the vascular cambium the way you would our blood vessels. Since they’re so important, you want to find the vascular cambium of your plant arm and align it practically perfectly with that of the cactus.

Step 4: Wrap twine or rubber bands around your cactus. Don’t just do this where the grafting has occurred, but the whole thing.

Step 5: Keep taking care of your cactus, but leave it wrapped up for several weeks. If the grafting was successful, then when you remove the twine or rubber bands, the arms will be attached on their own.

What Should You Do with the Broken Pieces of Cactus?

If your grafting was unsuccessful, it’s not a total loss. The broken cactus arm can be of great use, becoming the base to grow a new cactus.

I often include the far away lands a particular plant is native to so you’ll have a rough idea of the conditions the plant would ideally thrive in.

Step 1: Collect all the cactus arms and set them aside. You want to put them in a shady environment that’s kept at room temperature. Let them sit for at least two days, ideally a week. During this time, the ends can harden up and callus. The cactus arm is now at a much lower risk of developing diseases or rotting if it calluses.

Step 2: Create a rooting mixture for your cactus arms, combining inorganic materials with organic ones in a half-and-half mix. The soil will now maintain the correct moisture so roots can grow and take hold. Also, the soil will have optimal drainage. Add sand with a course texture as well as peat moss in your rooting mixture.

Step 3: After the week has passed, you can begin working with your cactus arms. Put on thick rubber gloves so you don’t get poked or stabbed by the cactus spikes. You may also use tongs or even chopsticks if you want to avoid direct contact altogether.

Step 4: Take your cactus arms and put them in the soil so they stand upright. The callused end should be relatively deep into the soil.

Step 5: Water your growing cacti like you would any other. You can mist them or use a humidifier to maintain the humidity. Within four to six weeks, the cactus will have grown roots that can take hold in the soil.

How do you fix a droopy cactus?

What if your cactus arms are all still attached, but the whole thing looks a little…well, droopy? What happened here?

A cactus that’s drooping is more than likely a victim of overwatering. You can confirm as much by doing the finger test in the soil. If the soil comes back very damp or even soaking, you’re overdoing it.

The first thing to do is get the cactus in a drier container. Gently work the cactus out of its current pot. Check the roots as you do so. If they smell, look mushy, or have gone brown (they should be white), trim the damaged parts off.

Next, repot your cactus with fresh soil. In the future, water the houseplant less often than what you’ve been doing to prevent more drooping.

How long does it take a cactus to grow?

In this article, we talked about both grafting your cactus and growing new cacti from the fallen arms. While both are possible, you may wonder how long you’ll have to wait to see a full-fledged cactus.

The answer? Because cacti are one of the slower-growing houseplants, and it can be months or even years in some cases before you see significant growth. If you have an especially large cactus then, it’s best to take precautions to keep it in good condition to prevent arm breakage.