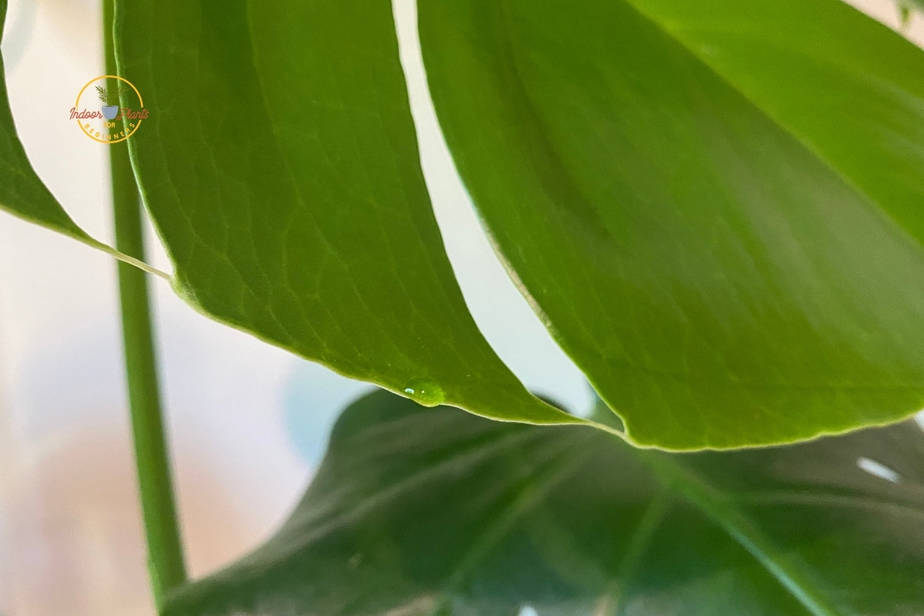 When you get warm, your body begins sweating to cool you down, but you didn’t think houseplants worked the same way. Yet time after time, you’ve noticed that your Swiss cheese plant or Monstera deliciosa looks like it’s sweating. Is that really sweat on your houseplant? If not, what is it?

I know I just threw a lot of information at you at once, which is why I recommend you keep reading. Ahead, I’ll talk more about xylem sap, discuss the processes of guttation and transpiration, and let you know how often the Swiss cheese plant should sweat.

Sweat? Tears? What Is the Fluid on the Leaves of My Swiss Cheese Plant?

As indoor gardeners, we love our houseplants a lot. That’s why we sometimes try to give them human attributes even though plants don’t necessarily behave the same way we do.

Take, for instance, your Swiss cheese plant or Monstera deliciosa. Each day, you notice that its leaves are wet, yet you haven’t watered the plant in days. One logical conclusion is to assume the Swiss cheese plant is so warm that it’s sweating.

Some indoor gardeners might even describe seeing this by saying that the plant looks like it’s crying.

Yet if your Swiss cheese plant were actually sweating, it wouldn’t release only water, but also sugar, salt, urea, and ammonia. Unless you’ve given your plant urea-based fertilizer, then it shouldn’t have any urea.

The same goes for ammonia. Thus, it can’t be sweat that you’re seeing.

Tears are comprised of mucus, water, and oil lipid. Not only does your Swiss cheese plant lack mucus and lipids, but it doesn’t have eyes either, so it’s not shedding tears.

What is the fluid that’s coming out of your houseplant then?

Indoor plants such as the Swiss cheese plant contain xylem cells, a vascular plant tissue that sends water, nutrients, and other fluids from the plant’s roots to their leaves and stems.

The sap in this case is in a liquid form, not like the sticky stuff you get on your fingers if you buy a Christmas tree.

It’s a perfectly natural occurrence to see liquid on the surface of your Swiss cheese plant’s leaves.

But why is this fluid coming out of my plant?

Why Is My Swiss Cheese Plant Sweating?

As I discussed, your Monstera deliciosa is using the xylem sap to bolster its large leaves and its stems through the delivery of nutrients.

The next time you see wet leaves on your Swiss cheese plant, know that you’re witnessing one of two plants processes: guttation or transpiration.

The Process of Guttation

Have you ever woken up early in the morning, stepped outside, and walked across your lawn? The grass was wet with dew, right? Guttation produces a similar effect, but it’s not dew the Swiss cheese plant releases, but xylem sap.

Guttation occurs in many vascular plants, grasses and the Monstera deliciosa among them.

Even some fungi can guttate.

These plants will close their stomata, or plant pores, as the sun goes down. That prevents transpiration from being able to occur, which I’ll talk more about shortly.

If your Swiss cheese plant is sitting in moist soil, the water in the soil will naturally seep down to the plant’s roots. However, the water potential from the soil to the roots differs.

What is water potential, you ask?

Water potential refers to the potential energy that water possesses. It’s measured by the volume in relation to pure water.

The roots of your Swiss cheese plant have a lower water potential compared to that of the soil. This causes the water to sit, building up mild pressure around the roots.

Hydathodes are only on the edge structures or leaf tips of a plant species, and not all plants have them.

As the hydathodes release the sap fluid, the xylem sap appears as droplets that sit on the leaves of your Swiss cheese plant.

If the root pressure continues, then so too will guttation.

Two example scenarios when you’re likely to see the most guttation in your Monstera deliciosa are:

The Process of Transpiration

Although I’ve written about transpiration before, I want to go into a lot of detail now so you understand more about the behavior of your indoor plants.

After all, more than just your Swiss cheese plant will transpire!

Transpiration is how water or fluids like xylem sap travel across your houseplant, reaching areas including flowers, stems, and leaves.

Why the need for water travel at all? Even if you give your plants the recommended amount of water, they still don’t need every last drop. Really, your plant needs very little.

And in some instances, your plant releases 99.5 percent of its water, so you can see how little it requires.

Quick caveat: The above fact doesn’t mean you should stop watering your plant as often as you usually do. Giving them less water can disrupt both transpiration and guttation, and you don’t want that.

The stomata or pores across the leaves are in use again during transpiration, this time opening up rather than remaining closed as they do during guttation. When stomata open, carbon dioxide diffuses, which is a necessary component of photosynthesis.

Since sunlight is also crucial in photosynthesizing, it makes sense why transpiration doesn’t occur at night.

Besides aiding in photosynthesis, your plants also need to transpire for other reasons.

For instance, transpiration sends mineral nutrients to your plant’s shoots. If the cells within the plants have higher or lower osmotic pressure, transpiration can regulate that pressure.

The process of transpiration also keeps your plants cool.

What is osmotic pressure?

Osmotic pressure is the amount of pressure put on a solution to keep a pure solvent’s inward flow from reaching a semipermeable membrane.

Indoor plant species such as the Swiss cheese plant will change their stomatal aperture size to determine the transpiration rate. If the stomata are more open, then transpiration will occur more often than it does when the pores are less open.

Remember, transpiration can’t happen at all if the stomata close, which they typically do at night.

Your plant will also gauge how much indirect sunlight they’re receiving, the rate of wind, the temperature, the humidity, and other factors to determine if transpiration is necessary. How much moisture they have in their soil as well as the temperature of the soil can also influence or discourage transpiration.

How do these factors affect transpiration? It’s really fascinating stuff, so let’s take a closer look, shall we?

Should I Do Anything about the Sweat on My Swiss Cheese Plant’s Leaves?

If you get to witness your Swiss cheese plant “sweating,” now that you understand more about what it is, it’s truly a cool sight to behold, right? While your plant does its thing, what should you do?

Is there any need to grab a soft cloth and wipe away the xylem sap accumulating on the surface of the Monstera deliciosa’s leaves?

No! Remember, if you see fluid on your Swiss cheese plant, your plant is either guttating or transpiring. Transpiration is necessary for mineral and fluid transfer while guttation occurs when transpiration cannot.

By wiping away the fluids on the surface of your plant’s leaves, you’re aiding in water loss.

As the bullet points in the last section show, a transpiring plant is very sensitive to how much water it has. Water loss can change the rate of transpiration. When you see your Swiss cheese plant “sweating” it’s best to just leave your plant alone.

After guttation, you might notice a white, crusty-looking residue on your Swiss cheese plants’ leaves. This is the leftover potassium, sugars, and other inorganic and organic compounds as released when the plant guttates.

It’s all perfectly natural, so don’t clean that away either.

The only instance in which you want to pay closer attention to guttation is if your plant has fertilizer burn. This occurs when you’ve added too much nitrogen to your Swiss cheese plant’s fertilizer and the nitrogen is now leaching out.

By adding extra water, you can encourage the leaching to happen faster so the nitrogen is depleted, but do make sure you don’t pollute the water. A soil replacement can also help in this instance and may be best.

How Often Should a Swiss Cheese Plant Sweat?

Since guttation and transpiration occur on an as-needed basis, it’s hard to say how often you might see fluid on your Swiss cheese plant’s leaves.

I can tell you with certainty that if the leaves look wet nearly every single day or daily then it’s probably not simply because the plant is transpiring or guttating.

As I’ve mentioned, watering habits can also play a role in the wetness of the Swiss cheese plant’s leaves. Since you’re most likely adding more water than your plant needs, the water has to go somewhere, so your Monstera deliciosa will most likely guttate overnight.

If you’re not familiar with how often to water the Swiss cheese plant, let me help you.

You want to be able to feel an inch or two of dry soil before watering. If the soil is still moist, then hold off. Overwatering will also cause root rot, which can be a real problem for the Swiss cheese plant.

Despite what some people think, the Swiss cheese plant doesn’t sweat, nor does it cry. Instead, it releases xylem sap as a watery “sap” fluid through two processes, guttation and transpiration.

These processes are both totally natural, but if your plant has fluid on its leaves all the time, it’s probably because it’s being overwatered.

If you’re tending to a Swiss cheese plant, I sincerely hope the information in this article helps you!