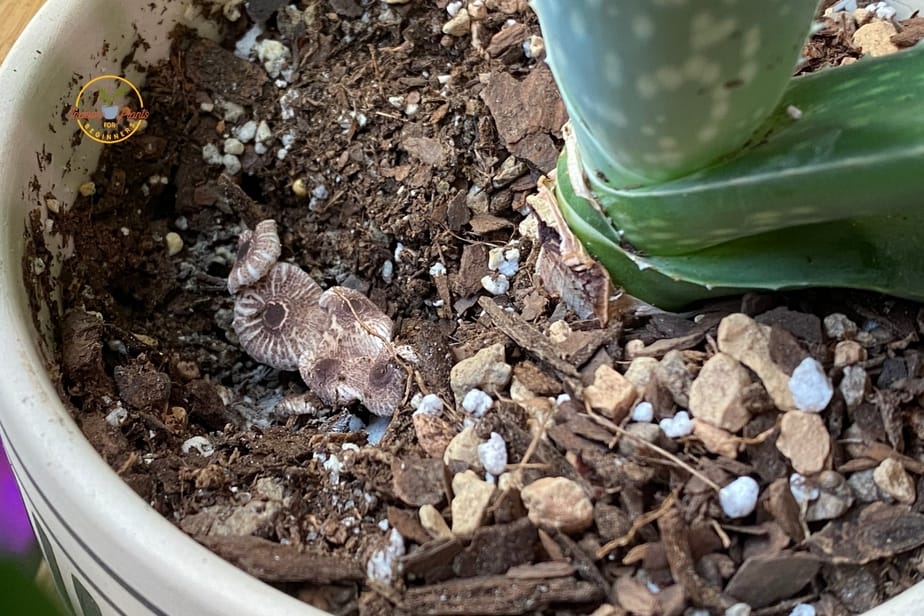 If you see these quickly reproducing mushrooms popping up in your houseplants, it’s usually has to do with the soil, overwatering, or hitchhiking spores that landed on your indoor plant. Since most people want to remove these mushrooms, I’ll also tell you how to do so safely and naturally.

What are These Houseplant Mushrooms?

First, here’s an explanation of what’s growing amongst your houseplants. The plantpot dapperling or Leucocoprinus birnbaumii belongs to the Agaricaceae family.

It’s a gilled mushroom species that may have white or yellow outer caps. That color comes from birnbaumins, a type of alkaloid. The reason this mushroom is called the plantpot dapperling specifically is because it tends to pop up in all sorts of plant environments, from flowerpots to greenhouses and everything in between.

Its other nickname besides the plantpot dapperling is the flowerpot parasol, which is quite appropriate as well.

The plantpot dapperling might grow one by one, but it rarely stays that way long. This particular mushroom species can reproduce mighty fast, and not even in the traditional way that many creatures replicate.

By releasing its spores into the air, this mushroom (Leucocoprinus birnbaumii) can spread quickly among the rest of the surrounding plants.

Once settled in, the plantpot dapperling likes to feed on compost and other forms of decaying plant matter. As the mushroom begins to age, its color may lessen.

With that little lesson out of the way, it’s time to discuss the multitude of reasons you might see Leucocoprinus birnbaumii on or around your indoor plants.

What Causes Mushrooms to Grow in Houseplant Soil?

The plantpot dapperling grows natively in subtropical and tropical regions, including temperate zone warm areas like Australia, parts of Europe, and in North America’s plantpots and houseboxes. This mushroom has even been spotted in England, although the plantpot dapperling does not like cold environments.

Depending on where you live then, you could theoretically see the plantpot dapperling mushroom both in your indoor and outdoor garden. If you have more pronounced cold and warm seasons, then your mushroom problem might begin in the summer and naturally abate in the autumn.

Even if you keep your houseplants tucked away inside where the seasons don’t affect them outside of how much daylight is available, you still must be cautious. If you grow tropical houseplants that thrive in heat and humidity, your houseplants may be more prone to growing mushrooms.

The plant species that require humidity include most ferns, the peace lily, bromeliads, orchids, golden pothos, the snake plant, and the Swiss cheese plant or Monstera deliciosa.

I’m not advising you to stop humidifying these houseplant species and others that need the warmth and moisture. That would undoubtedly lead to their doom. Instead, you have to be extra vigilant, keeping an eagle eye out for signs of the plantpot dapperling.

Since water is a great way to induce humidity, it makes sense that overwatering could attract the Leucocoprinus birnbaumii to your indoor garden as well.

Not only do you have to worry about the mushrooms when you overwater your houseplants, but root rot as well. When too much water accumulates within your houseplant’s pot, the roots become oversaturated to the point of their eventual death.

You can treat root rot if you spot it quickly enough, cutting away the black and deadened root parts, repotting, and amending bad habits. If the root rot has advanced beyond a reasonable degree though, advanced root rot usually spells the end for your houseplant.

Learning when to water your plants will serve you well, so here’s what to do. If you plunk your index finger into the soil one to four inches deep and you feel moisture, then refrain from watering unless you have a humidity-loving plant like those listed above. They need consistently moist soil while other houseplant species require mostly dry soil before re-watering.

Plantpot dapperlings love to feed on decaying matter. Yes, that can sometimes come from your plants, but more than often, it’s within the soil of your houseplant. Well, if you use a rich potting mix, that is.

That said, there’s definitely an argument that finding little yellow mushrooms in your houseplants soil could be a good sign.

Potting mix contains perlite, sand, composted bark, and peat. Some brands of potting mix even add recycled mushroom compost, which the plantpot dapperling will feed on.

They also love to chomp on peat, which is decaying organic matter and vegetation.

Like any living thing, the plantpot dapperling has to eat to survive. If it finds a readily abundant supply of food through your indoor plant’s pot, then it’s not going to leave anytime soon. If anything, it’ll thrive in the rich ecosystem and basically set up camp and have a party in your plant’s pot or container.

“Spore spread” often happens because the spores landed in your houseplants soil at some point along its journey to your happy home. Possibly when your plant was still at a gardening store ,before you even purchased it.

It’s possible the mushroom spores contaminated the plants soil during transport on its way to the garden store. Once at the nursery or garden store, If Leucocoprinus birnbaumii spores blow in from other plants in the store near the pant you end up purchasing, that could also be what lead to the development of this mushroom species in your houseplant.

I mention all of these other likely scenarios because I believe it’s important for you to know that, even if you do everything right in your houseplant care, sometimes you can still end up with Leucocoprinus birnbaumii in your plant’s pot.

Are Mushrooms Bad for Potted Plants?

Through this article, you’ve identified the mushrooms in your houseplant’s pot as the Leucocoprinus birnbaumii. Should you be panicked?

Yes and no. I say yes because, as talked about earlier, once the plantpot dapperling finds an environment it likes, it will reproduce. Thus, if you have one mushroom now, within a few days, I can promise you that you’ll have several more, and then several more from there.

Before you know it, it’ll be a full-on infestation. So you certainly don’t want to ignore the mushrooms and hope they’ll go away on their own, because just the opposite will happen.

Otherwise, the plantpot dapperling is a nuisance, yes, but it’s not dangerous to your houseplants. It isn’t competing for the nutrients your plant needs to grow, nor will it try to eat the plant itself, including its roots, stems, leaves, and flowers.

If you grow fruits and vegetables at home or in the office, a few plantpot dapperlings won’t yield your crop inedible. You also won’t taste any difference in flavor compared to growing the plant in a pot without mushrooms.

How to Naturally Remove Houseplant Mushrooms

To reiterate, you certainly don’t want the plantpot dapperling as a regular companion to your houseplants. If you give an inch, these mushrooms will take a mile.

To prevent an all-out infestation, you need to act as quickly as you can, ideally once you spot the mushrooms.

Okay, so what must do you to get rid of your houseplant mushrooms? You have a few options, so let’s discuss them in more detail now.

The first method maybe isn’t the most expedient, but hey, it can work. That is, you want to sift and dig through your plant’s soil bit by bit to take out as many plantpot dapperling spores as you can.

The spores are typically yellow or white like the mushrooms, so you can see them easily enough against very dark soil.

You can pluck up the spores by hand, but I’d wear gardening gloves or even a pair of basic rubber gloves when tackling this job. Otherwise, with a small shovel or scooper, you can remove the spores that way.

If the spore removal option seems too time-consuming or just impossible because you sense the spores have gotten deep into the soil, that’s not your only choice. You can also just toss out your houseplant’s soil and start fresh.

You might not want to use potting mix this time if you can help it. If not, then you certainly want to avoid any mix that uses decaying matter, as you’re just inviting in the plantpot dapperlings at that point.

Also, avoid saturating this soil in water too often and you should be in good shape.

Let a few weeks go by after removing the spores or changing your soil. Hopefully, you’ve taken care of your mushroom problem with one of those two methods. If the plantpot dapperlings reoccur though, then you might have no choice but to get rid of your houseplant.

Yes, it’s sad, but in some cases, it’s what you have to do. I would recommend trying everything you can to avoid this outcome, but you also have to know when to call it quits.

Can you eat the plantpot dapperling?

The removal methods I discussed above definitely seem effective, but your first idea might be to eat the plantpot dapperling. After all, most mushrooms are quite tasty, right? Yes, but not the Leucocoprinus birnbaumii. How toxic they are is not quite well understood, but experts have agreed this species of mushroom is not edible.

By the way, if you ever see plantpot dapperling fruit bodies, don’t eat those either. These are indeed toxic, and if you consume them, you’ll have a very upset stomach.

What is a natural fungicide for plants?

If you’d prefer to treat your mushroom problem with a natural fungicide, you can make a fungicide at home that can kill or lessen the plantpot dapperling.

Please share this article with your friends and family that have houseplants. I get questions all the time regarding mushrooms growing in houseplants so I’m hoping this article will shed some light on the topic and help a lot of people. Thanks!