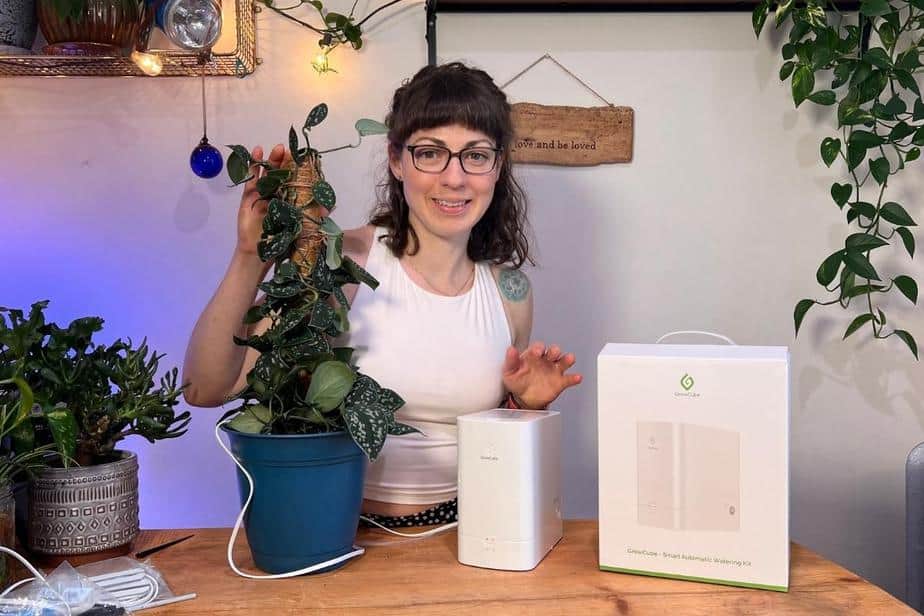 The Elecrow GrowCube watering system was the winner of 2022 iF DESIGN AWARD so it’s been on my radar for a while now, and today, I want to share this award winning indoor plant product with you. I’ll explain what the GrowCube is and my thoughts after spending a few weeks using it myself.

I’m sure you’re eager to learn a lot more about GrowCube, right? Then you’ve come to the right place.

Before jumping in I want to make it perfectly clear up front that Elecrow provided me with a GrowCube to keep in exchange for an honest review of their product.

What Is the Elecrow GrowCube Watering System?

How many times has a situation like this happened to you?

You thought you had a decent automatic watering system set up for your plants. You go away on a business trip or vacation only to come back a week later to a dead indoor garden.

The makers of the Elecrow GrowCube watering system were tired of this exact scenario. They weren’t impressed with the current options on the market such as external watering tanks and manual timers.

Thus, the GrowCube was born.

Through features such as various watering modes, an external water inlet, a sizable water tank, soil moisture sensors, and its tandem app functionality, the GrowCube is able to water your plants only when your plants need to be watered.

This is great for the times when you’re not near your plants to do it yourself as well as when you are their. Choosing to automate even a portion of the watering requirements it takes to manage multiple indoor plants year round has been wonderful.

Having some of my indoor plants watered by GrowCube has given me more time to propagate new plants as well as repot plants that I wouldn’t have had time to repot otherwise.

The GrowCube is designed to water up to four plants in your indoor garden all at once. You set the rules according to the app and the GrowCube does the rest.

Let’s now go feature by feature of the GrowCube so you can see how these individual components come together to make one efficient automatic plant watering system.

If you have an assortment of plants in your indoor garden like I do, then you know that not all plants have the same watering requirements.

Even if you do stick to one species or genus, then you’re well aware that as the seasons change, your plant might more thirstily drink water or need less of it.

Let’s take a closer look at each watering mode now.

If something is wrong with the GrowCube, it will likely know before you do.

If the anomaly is not fixed after three instances of beeping and notifying, the GrowCube will lock itself via the self-protection mechanism. This safeguards the device from any further damage.

To unlock the GrowCube, all you have to do is hit the slide button.

The Elecrow team designed the nozzle of the GrowCube to produce a uniform water spray that’s just fine enough to hydrate plants.

To do this, they tested the appropriate hole spacing distance, how many holes were needed, and the diameter of each.

The coolest part of the nozzle is that it’s completely flexible. You can bend and angle it to accommodate indoor plant species from trees to thin-stemmed plants.

Being able to wrap the grey flexible nozzle around the base of the plant exactly where you want the soil to be watered is brilliant. I also used a few of the stakes they provided to hold the watering nozzle into the soil so it would remain in place and water my plants perfectly every time.

I can rely on water globes and self watering planters when I need my indoor plants to be watered for just a few days. But when I’m away for more than a few days I always end up worrying that my plants may run out of water before I’m home to resume watering myself.

With no one to check on the plants for days, I wouldn’t know my plants are thirsty until it’s too late.

The GrowCube features a water inlet that connects to external water sources that will extend how long its able to water my plants. It’s ability to water my plants for up to two weeks, my indoor plants will never have to thirst.

That said, for those short trips of a day or several, the GrowCube has sufficient enough water via its 1.5-liter tank to take care of keeping your plants hydrated.

According to Elecrow, the GrowCube watering tank provides enough water for four small potted plants for up to two weeks each time it’s filled.

The soil moisture sensors are the real stars of the show here.

The GrowCube sensors have a one-meter sensor wire length and are corrosion-resistant, waterproof, and very precise.

The magnetic interface makes it easy to set up your soil moisture sensors and begin using them immediately.

By internally calculating and calibrating the soil environment, the sensors produce a rate of moisture in the soil by a percentage.

Then, depending on the watering mode you selected, the GrowCube will replenish the soil to a recommended range.

The soil moisture sensors work as part of a four-channel system. Each sensor connects to a water outlet, with up to four outlets available.

This is part of how you can maintain four plants at once using the GrowCube, even if the water requirements of those plants are each completely different from each other.

Using the sensors information each plant on it’s own channel will receive the precise amount of water it needs to thrive. No less , no more.

The heart and soul of GrowCube is its free app, which you can download on the Google Play Store and the Apple App Store.

The app has a database that details care information for more than 3,000 plant species.

You can quickly learn about the proper humidity, temperature, and soil moisture (represented in percentages and degrees Fahrenheit) for each plant and then set up the GrowCube to meet those conditions.

Besides the incredible soil moisture sensors, the GrowCube also includes an ambient temperature and humidity sensor that’s built into the device.

This sensor’s job is to detect both the humidity and the ambient temperature, including how they change in real-time.

You can track how humid it is at home as well as the ambient temperature in the GrowCube app.

Then, when you turn on Smart Watering Mode, you have the option through the app to tell the GrowCube not to water your indoor plants according to certain sun exposure or temperature parameters.

How to Set up the Elecrow GrowCube Watering System

The GrowCube is exceptionally simple to set up, requiring only three steps. Let’s go over them now.

Once your GrowCube is out of the box, connect the water pipe and the soil moisture sensor, repeating this if you plan on watering several plants using this watering system.

Next, place the sensor in the soil. Position the nozzle so that it’s closest to your plant’s rhizome.

Then, if you haven’t already, you should download the free GrowCube app so you can track your plant and begin automatically watering it. Again, the app gives you complete control to override the automatic portion of the watering system anytime you’d like, if that’s what you feel works best for your plants.

My Experience with the GrowCube

So now that you’re well-acquainted with the GrowCube, I want to talk about my experience using this smart watering system.

First, I have to comment on the looks of the GrowCube itself.

Remember, the Elecrow team was displeased with the look and bulk of most automatic watering solutions that were available at the time. That’s why the GrowCube is such a streamlined watering system.

It’s sleek and stylish too, enough so that anyone who spotted the GrowCube in your home or office probably wouldn’t believe how efficient it is at watering your plants.

If you’re someone who tends to grow and care for indoor plants in a cubicle or a small apartment, you’ll adore the size of this device.

The GrowCube is not very large at all. By my own measurements it’s just over 7 inches tall, 7 inches deep and roughly 4 inches wide. The point is that it takes up less space than an additional potted plant.

It never crossed my mind to try to hide the GrowCube but if you wanted to place it out of sight, the water pipe could easily be hidden on the backside of the plants and the main device could be hidden behind a large potted plant if you prefer.

You may be dubious about all the new Kickstarter projects that crop up these days, but the GrowCube isn’t new. This original idea came about a decade prior, but it’s just that the GrowCube is finally now gaining traction on Kickstarter.

I love how easy the GrowCube is to set up. The steps really are simple and fast.

It took me between 10 and fifteen minutes to completely set up my GrowCube and begin watering my plants.

Plus, the functionality of the GrowCube is awesome. You set up everything from your phone, which you’ll have handy whether you’re on a business trip or a family vacation.

The app is free, and it’s very easy to use. I like how I can toggle how much water my plant receives according to its needs.

The intuitive sensors are probably my favorite part of the GrowCube. I love how the sensors can keep your plant watered well in the summer just as they can in the winter.

As convenient and inexpensive as watering bulbs are, seasonal and temperature changes are just not something they can accommodate for.

It’s clear to me that the Elecrow team loves plants. They treat plants the same way us indoor gardeners do, like pets.

The team knew that a one-size-fits-all solution was not the way, and so now indoor gardeners have something more intelligent to keep our plants healthy until we return to them.

As of this writing, Elecrow is still seeking backers for GrowCube on their Kickstarter page.

Elecrow has more than raised the funds they were seeking, but there’s still time to pledge if you want to be an “early bird”, receive a discount and support this awesome project.

If you pledge at least $79, you’re eligible for the Super Early Bird package, which includes one GrowCube with one filter head, 12 brackets, a 10-meter water pipe, four nozzles, four soil moisture sensors, and one power adapter.

You can even get four GrowCubes if you pledge at least $310. That package includes four filter heads, 48 brackets, four water pipes, 16 soil moisture sensors, and four power adapters.

link to Indoor Plants That Give Oxygen 24 Hours

Most people, especially indoor gardeners, are aware that indoor plants generate oxygen during the day. But many people aren't aware that there are also indoor plants that produce oxygen around the...

Continue Reading
link to Fungus Gnats in New Potting Soil? Here’s What to Do

You open a fresh bag of potting soil to fill up your plant’s pot when you see them – fungus gnats. They can get into your potting soil and wreak havoc. I’ll tell you why it happens and how to...